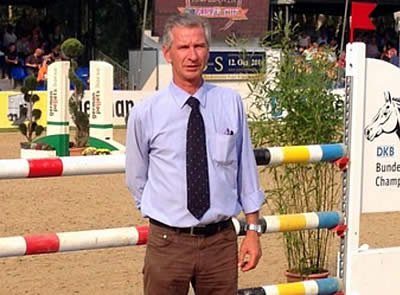 Andreas Hollmann, the German course designer, who died suddenly this week at the age of 53.

Lausanne (SUI), 29 January 2015 – Andreas Hollmann, an FEI Level 3 course designer who learnt his trade with Frank Rothenberger, has died suddenly at the age of 53. He had been working at the Mediterranean Equestrian Tour at Oliva in Valencia (ESP) when he collapsed on Tuesday of this week.

Based close to Dortmund, he successfully completed the apprenticeship to become a professional instructor, or Bereiter, in Germany, but health problems meant that he could not continue to work in this area. He competed successfully up to national 1.40 classes, but back problems meant that he had to abandon his competitive career. Not wanting to leave the equestrian world, he took up course design, which became his real love.

Andreas Hollmann worked with Frank Rothenberger for more than 15 years, including the FEI World Equestrian Games™ 2006 at Aachen, the European Jumping Championships 2013 at Herning (DEN), and several FEI World Cup™ Jumping Finals. He was also the course designer at several CSIs, including at the Olympic Birds’ Nest Stadium in Beijing (CHN) and CSI-Ws in South Africa.

He had been appointed as course designer for this year’s CSIO 5* in Sopot (POL), part of the Furusiyya FEI Nations Cup™ Europe Division 2 and, for the first time, for the German National Championships, the Bundeschampionat 2015 in Warendorf. He also organised a number of national shows in Germany, together with his sister Gaby.

“Andreas Hollmann was a really wonderful person,” FEI Jumping Director John Roche said. “He was a very familiar presence on the international circuit and was an extremely capable course designer. He always had a big smile on his face, and will be greatly missed by everybody who knew him.”

A minute’s silence was held in memory of Andreas Hollmann at the Mediterranean Equestrian Tour (MET) yesterday.

“We lost our beloved friend and MET member Andreas Hollmann. We will miss you,” the MET posted on its Facebook page.

The FEI expresses its sincere condolences to Andreas Hollmann’s family and his many friends, the German Equestrian Federation and the global Jumping community.