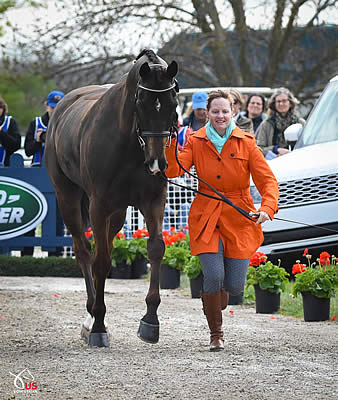 Lexington, Ky. – The Land Rover Kentucky Three-Day Event (LRK3DE) is set to begin at the Kentucky Horse Park following the first horse inspection on April 25. A total of 46 athlete-and-horse combinations from nine nations will vie for top honors at America’s only CCI4* event, which also serves as the Land Rover/USEF CCI4* Eventing National Championship, awarded to the highest-placed U.S. athlete. The Roger Haller Trophy, honoring the late, internationally respected eventing official, will be awarded to the national champion.

The 2018 field is full of talented combinations, and several returning national champions hope to stake their claim on the overall and national title. Defending Land Rover/USEF CCI4* Eventing National Champion Phillip Dutton (West Grove, Pa.) already has the most titles at five, but he could add another to his resume with I’m Sew Ready or Z. Dutton rode I’m Sew Ready, Kristine and John Norton’s 13-year-old Dutch Warmblood gelding, to a 10th-place finish at the 2017 Kentucky event in the horse’s CCI4* debut. This year, they finished fifth in The Fork CIC3*/FEI World Equestrian Games™ Tryon (WEG) Eventing Test Event to prepare for the LRK3DE. Z, a nine-year-old Zangersheide gelding owned by Thomas Tierney, Simon Roosevelt, Suzanne Lacy, Ann Jones, and Caroline Moran, will make his CCI4* debut with Dutton. The pair comes to Kentucky in fine form after winning The Fork CIC3*/WEG Eventing Test Event.

Looking ahead to cross-country day, Dutton said, “We have been around the course this morning and, as we expected, it is big but fair, so I’m sure it will be a great competition.”

“I think this weekend speaks for itself, how much Leslie and the program have helped my riding,” Martin shared when asked how the Emerging Athlete Eventing 25 Program has helped her development. She added, “Being able to have a camaraderie with all the other riders is great. I wouldn’t know Mackenna Shea [an Emerging Athlete Eventing 25 Program alum] if it wasn’t for the program.”