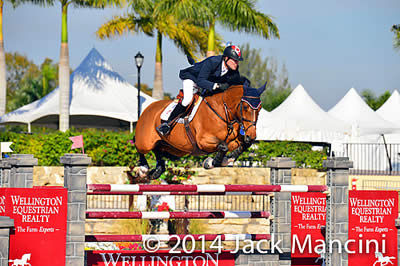 Wellington, FL – December 19, 2014 – Equestrian Sport Productions (ESP) hosted its Holiday Festival II this week on December 16-18, 2014, at the Palm Beach International Equestrian Center in Wellington, FL. The week featured the $10,000 Equiline Open Stake on Tuesday with a win for Ronan McGuigan (IRL) and Capall Zidane, and the $25,000 Holiday II Grand Prix on Thursday with a win for Ian Millar (CAN) and Star Power.

Earlier in the week, the $10,000 Equiline Open Stake was held on Tuesday with a win for Ronan McGuigan and his own Capall Zidane. Eighteen entries showed in the class with five in the jump-off and four double clear rounds. McGuigan and Capall Zidane won in a time of 40.25 seconds. Wilton Porter and Sleepy P Ranch LLC’s Paloubet finished second in 41.40 seconds, and Gemma Paternoster and her own and Julia Harrison Lee’s Osiris placed third in 42.31 seconds. Ian Millar and Star Power geared up for their win later in the week with a fourth place finish in 44.31 seconds.