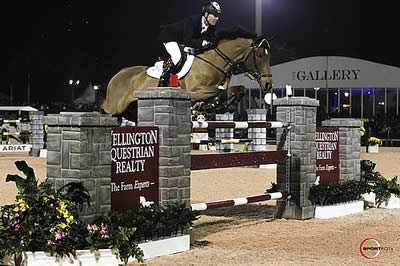 Course designer Luc Musette (BEL) set a challenging track for the 45 starters in Saturday night’s class under the lights of the International Arena at the Palm Beach International Equestrian Center (PBIEC). Only five entries were able to advance to the jump-off, but all went on to clear the short course. The top four were separated by just fractions of a second.

Watch Ian Millar and Dixson in their winning round!

Paige Johnson (USA) and Salamander Farm’s Dakota set the pace in the jump-off at 40.99 seconds to finish fourth. Cian O’Connor (IRL) and Adena Spring’s Quidam’s Cherie upped the time in 40.27 seconds to place third. Millar and Dixson followed with the winning round in 40.10 seconds. Ljubov Kochetova (RUS) and Veyron jumped into fifth place in 42.40 seconds, and Goutal wrapped up the night with a time of 40.12 seconds aboard Zernike K.

A ten-time Olympic veteran for Canada and one of the sport’s most illustrious stars, Ian Millar had a fantastic 2014 season with Dixson, including a big win in the $1.5 Million CP International Grand Prix at Spruce Meadows and a trip to France for the Canadian show jumping team at the Alltech FEI World Equestrian Games. Millar explained that the 12-year-old Belgian Warmblood gelding (Vigo d’Arsouilles x Olisco) never missed a beat coming back into competition after a short rest at the end of the season.

“He had been off since the third week of September, and I didn’t start him until December again because he lives with Mrs. Grange,” Millar noted. “He had a nice break and when I got going with him, his conditioning came right back because they use a treadmill with him. Even though he’s let down, his fitness is taken care of.”

“It is so interesting with these horses how they remember; they don’t forget a thing,” Millar stated. “A good, trained horse really holds it. You get on and it was like I had ridden him the day before, so you pick up where you left off and you go again. That is quite exciting.”

Dixson is related to Millar’s great mount Big Ben and has always been special to the rider for that reason alone, but has proven his own talent in recent years.

“The greatest horse I ever had was Big Ben, and this horse is related to Big Ben on the mother line,” Millar detailed. “I felt very strongly about him when I saw him. I could see the weaknesses, but I was absolutely drawn to him.”

Following the class, Millar spoke about the course, stating, “Luc is one of my favorites because he is so subtle. He takes course design to an art form. That first course was extremely interesting. A course designer like that will find weaknesses in a horse and rider. There’s no way around it – a rider’s flaws are going to come out and a horse’s flaws are going to come out.”

“The jump-off could have had a little more imagination in it for my liking,” Millar admitted. “It was just one track as fast as you could go. There weren’t really any options. You could take a stride out to the liverpool, but it was pretty much a straight run and gun. It’s good that it turned out that it was only five of us. It gets too crazy at that point. You would rather slow it down and get more of a jumping contest.”

Although the time to catch was very fast, Brianne Goutal was just off the winning mark for her second place finish with Zernike K and was very happy with her mount’s performance.

“He’s amazing,” she smiled. “He is just a really classical little guy with great style. He tries really hard. He has been a little up and down. He was a little bit inconsistent last year, but all summer long and fall up until now, he has been very consistent. He is wonderful, and he really gives it his best shot each time. I felt he was super smooth tonight. He did everything I was asking, going and coming back really nicely, which is what I was having trouble with before. I am thrilled with how he went.”

Cian O’Connor also had a great night with his mount, Quidam’s Cherie, and was happy take home the third place prize.

“She is a nice mare. She placed third in the grand prix of Nations Cup week last year. She jumped really well. I only gave her one 1.40m class the first week and she jumped the WEF (Challenge Cup) well this week and went double clear tonight, so I was very pleased with her,” O’Connor stated. “It wasn’t even one fifth of a second between the top three. It was a very competitive class.”

“It was truly an honor to watch Ian go,” Martin stated. “I have grown up watching him. He is a complete technician when it comes to this sport. I thought Brianne was nearly going to catch him at the end there, but it was a great class.”

“We have been involved in some exciting grand prixs since we have been in town, which has been five years now,” Varney added. “For a legend like Ian to win our grand prix is an honor, and we really do mean that. It is so much fun to have three riders like this at the top of their game early in the season and good luck to them in the weeks to come.”

Millar and Goutal each spoke to the great turnout for this year’s competition and the wonderful crowd that was at PBIEC to cheer them on Saturday night.

“I think traditionally the busiest time for the facility is somewhere in the middle weeks, and it is up over last year,” Millar stated. “Whether that is a reflection of the economy, or our sport is getting more popular, or this particular venue is drawing more and more I don’t know. It is probably a combination of all of them because this venue is unrecognizable compared to what it was a decade ago.”

Goutal agreed, adding, “It is amazing the crowd that is drawn here. It makes a big difference for us. It keeps the atmosphere up and the energy high. Three years ago, forget five years ago, we didn’t have anybody in the stands and now it is packed full on Saturday nights. It is amazing. Everything is a steady growth of only good things, I feel.”

For her consistent performances this week, Paige Johnson (USA) was presented with the Leading Lady Rider award from Martha Jolicoeur of Illustrated Properties in memory of Dale Lawler.

The 2015 Artisan Farms Under 25 Grand Prix Series kicked off with its first of seven events for the circuit with the $10,000 Artisan Farms Under 25 Grand Prix Welcome on Saturday afternoon. With record entries, this year’s series will award $170,000 in prize money. The series gives young riders a valuable stepping-stone from the junior and amateur ranks to the grand prix level.

“He is a super horse,” Garza praised after his win. “He has given a lot to me, and I am very grateful to him. He was a super competitive junior horse. He basically took me from the medium juniors all the way up to the 1.50m. He is like my teacher. He is one horse that I really understand, and he is a horse that I can show a lot. He is very brave and very fast. He is a very winning horse.”

Garza explained that he was aiming Bariano at last summer’s Central American Games trials, but the horse had to take some unscheduled time off due to an injury.

“This is his first big show coming back, so I am very happy that he is back with us and he is a great addition to my string of horses,” the rider stated.

Commenting on his winning round, Garza detailed, “My trainer, Darragh, really wanted me to go for it. I think I made up time on all the strides, especially on the turn where I did seven strides to the double, I don’t think anyone else did that. It was pretty long, even for me. I think it was just that he is a very quick horse. He turns very fast, and he doesn’t lose a lot of time in the air. I think that is where I caught Jessie. I saw Jessie go and she was very fast, so I knew that I had to go fast, but I just didn’t know how much. We decided to just go for it and it paid off.”

Garza plans to compete in all of the Under 25 classes throughout the circuit and thanked the sponsors for supporting and continuing the series.

“This is the second season I am going to do it,” he noted. “It is a very nice series, and I cannot thank the Ziegler Family and all of the sponsors enough for putting this together. It is a great class for us young riders that are trying to move up. It is a nice in-between class between the pros and the juniors.”

The second class of the series, the $25,000 Artisan Farms Under 25 Grand Prix presented by Equine Couture/Tuff Rider, will be featured on Sunday morning.

Elizabeth Faraci rode her own horse Adore to reserve champion honors. Adore earned a first, second and third over fences as well as a second place finish in the under saddle.

Gochman has had Fredrick less than a year and has focused on getting to know him over the past several months. Not wanting to rush Fredrick, trainer Scott Stewart and Gochman took the fall season off, waiting to return to the show ring this winter. “He [Fredrick] is a bigger horse than I’m used to, but slowly we are adapting to each other and he is becoming a fast favorite,” Gochman explained.

Going forward Gochman looks forward to being able to get to know Fredrick better in the Amateur-Owner 3’3″ division. “He [Fredrick] is very intelligent and very sweet,” Gochman smiled. “It’s been fun to learn about his personality. He makes me smile, and he is always looking for his treat.”

Having a successful week, Gochman is looking forward to the upcoming weeks of competition. “Everything has been on our side, the weather has been great and the courses have been superb,” Gochman commented.

Although Gochman is busy competing herself, she also has two daughters, Sophie and Mimi, competing at WEF. Based out of New York City, the family travels back and forth on weekends. Gochman explained, “It’s a lot of moving parts, but we feel that it’s worth it and we are lucky to be able to come down to sunny Florida to escape the cold!”

When together at WEF, Gochman balances focusing on her own classes as well as supporting her daughters in the pony ring. “It keeps us on our toes. I go and support them [Sophie and Mimi] whenever I can and they come and support me whenever they can,” Gochman said. “I really appreciate seeing their smiling faces at my ring!”

While Gochman and her daughters enjoy watching each other, they are also able to learn from each other. Now that Sophie and Mimi are older they have started to give their mom some pointers. “They really know what to look for now,” Gochman remarked.

Week two concludes on Sunday with the $25,000 Artisan Farms Under 25 Grand Prix, presented by Equine Couture/Tuff Rider, and the $34,000 Suncast® 1.50m Championship Jumper Classic in the International Arena. Hunter coverage concludes in the Rost Arena with the Echo Junior Hunters 3’3″. For full results and more information, please visit www.pbiec.com.