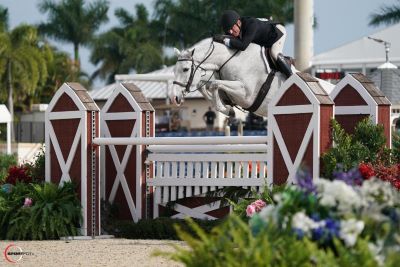 Scott Stewart and Catch Me © Sportfot.

Stewart and Catch Me took home a blue ribbon in every over fences class and were third in the under saddle to earn the tricolor ribbon. The reserve champion title went to Jennifer Hannan, of Wakefield, RI, and her own Olympic Fire. The pair earned two seconds and two eighth place ribbons in the division.

Ashlee Bond and Imagine Save the Best for Last in the $6,000 Douglas Elliman Real Estate 1.45m Jumpers CSI3*

A total of 40 entries contested the two-phase track set by Catsy Cruz (MEX), which featured nine jumping efforts in the first phase, moving over to an additional six efforts in the second phase. With 15 passing the initial test, it was the best for last on the day as Bond and the eight-year-old Dutch Warmblood mare by Emerald x Heartbreaker jumped double clear and posted the fastest time of 26.24 seconds.

“We got her when she was five,” said Bond. “It was a partnership horse for a while, but we bought them out at the beginning of last year because we really felt like she was something special and really suited me. I know her really well, and she’s just one of those horses that is so naturally careful. She doesn’t really know what she can or can’t do.”