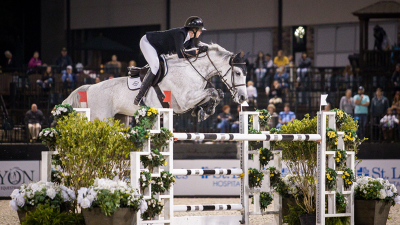 The Guilherme Jorge (BRA) course design challenged 53 pairs over the first round, with six pairs dashing for cash over the jump-off test. Holloway and the 2011 Westphalian mare (Con Spirit 7 x Come On) owned by the Hays Investment Corp. were first to go in the second round, producing a slick performance that could not be topped.

With the victory, Holloway is the first rider to achieve two FEI Grand Prix wins aboard the same horse in 2021, having also dominated in the spring at TIEC. It was also Holloway’s second notable win in two days: she and Ruby Tuesday, the 2011 Oldenburg mare (Icarus “Any Given Sunday” x Manna “S&L SoBeIt) also owned by Hays Investment Corp., championed Friday’s $10,000 USHJA National Hunter Derby.

Holloway remarked that while both courses were well suited to her mount, the key to her win was letting Pepita con Spita take her own run at the obstacles:

“She is quite a horse! She’s very special and loves to win,” Holloway emphasized. “As long as I’m up to the task, she always is. She loves to go fast, so I was just letting her go. [The course] was smooth,” Holloway offered of the track that kept all but three pairs from going double-clear. “There were definitely some difficult places, I thought, but it was all spread out, so the course flowed pretty well. It was well-suited for her, so I was excited about that.”

As the first to attack the jump-off, Holloway’s strategy was to put pressure on subsequent challengers with a clear, fast round, and Pepita con Spita delivered when offered the chance to kick things into high gear. “She’s always game to go fast, so I just let her rip! She’s super catty, smart, and brave, so she’s super dependable in the ring.”