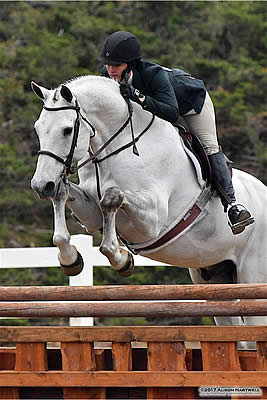 The Hunters were happening Week I of the Atlanta Spring Classic at the Georgia International Horse Park.

The $2,500 USHJA National Hunter Derby, presented by Kruse Cushion Ride, awarded the blue ribbon to Cassallo, owned and ridden by Erin McGuire of Cornelius, North Carolina.  McGuire and Cassallo held the lead after the first round with their score of 88 and topped that with a second round score of 90 for a combined 178.

McGuire commented, “The course was great. Allen [Rheinheimer] always does a great job. The Derby had a great first round and the second round had lots of options and you could make it as Handy as you wanted,” she said. “I just kind of cruised around and had a blast,” she said.

“I’ve had Casallo for about six years. He was my Junior Hunter and we leased him to one of Bob Crandall’s clients and I just got him back maybe in November or December,” said McGuire. “Bob was the one who bought and imported Casallo as a four year old and got him started and I then I bought him when he was seven. Leasing him back to Bob really brought everything full circle,” she said.

“I know him really well and he’s my heart and soul,” said McGuire. “He gives me all he’s got and I give him the same,” she said. “I focused so much on qualifying for the big shows when we did the Juniors and to show him again is just icing on the cake. Now it is so much fun to just go to horse shows and have fun,” she added. “He’s still available for lease or purchase, but for now I’m just enjoying the opportunity to ride and show him,” McGuire said.

Allure, owned and ridden by Gianna Cobb of Marietta, Georgia, earned a second place ribbon after earning a first round score of 83 and Handy score of 82 for a total of 165.

Perfektionist, owned and ridden by Phoebe Topping of Sagaponack, New York, placed fourth with their combined score of 158.

Pansy Winters’ Wheels of Fortune, ridden by Cindy Ball of Covington, Georgia, earned a sixth placing for their combined first and second round scores of 152.

Seventh went to Capriccio, owned by Samantha Kench and ridden by Carolyn Bell of Alpharetta, Georgia, and eighth was awarded to Americana, owned by Wind Haven Farm and ridden by Heather Zuber of Zionsville, Indiana.