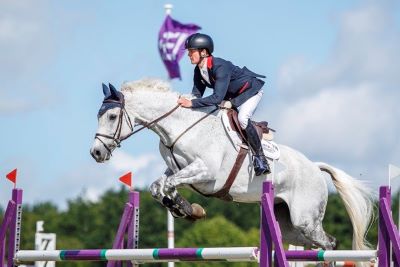 A team consisting of multi-medalled riders and young talent scored a home win at Houghton Hall (GBR) in the second leg of the FEI Eventing Nations Cup™. Team GB finished on a three-phase score of 114.0 penalties, a narrow margin over an all-female US team in second on 117.9. Sweden, another all-female quartet, were not far behind on 122.0 penalties, and are now Series leaders on 160 points after a third placing in the first leg, Pratoni del Vivaro (ITA). Britain and Switzerland are in joint second place in the current Series Standings, on 100 points.

Tom McEwen, who won team gold and individual silver medals at the Tokyo 2020 Olympics, led the CCI-S 4* section from start to finish. He was joined by Piggy March, who won team gold and individual silver at last year’s European Championships, and two younger riders who were making their Senior Team debut for Great Britain, although 22-year-olds Heidi Coy and Phoebe Locke have both had success on Youth Teams at the European Championships. Locke was unfortunate to fall off another horse earlier in the day, and was stood down by medics from competing, so her team horse was withdrawn. Despite the precaution, Locke is reported to be in good medical health.

Coy, the daughter of Dairy Farmer, is based with her horses on the family farm in Leicestershire which produces milk for Stilton Cheese. Her double clear to finish third individually on the diminutive mare, Russal Z, was a substantial help to the team. “I have produced her up the levels. The pressure was there. I didn’t want to let my team, my horse, or my owners down. I was mainly thrilled with her fantastic dressage score because this has always been her weaker phase. To follow it up with a double clear — you can’t ask for much more. She has a heart of gold and she tries her best for you even though she looks like a little pony – she is only 15.3hh. I’m so grateful to be on a team with the likes of Piggy and Tom. Phoebe and I did Young Riders and Pony Teams together, so it’s nice for us to be on this team together.”

McEwen, who also scored the fastest cross-country time of the day on Bob Chaplin, summed up the performance: “We were down to three members for the cross-country after poor Phoebe withdrew, but the team has done amazingly. The British team has such strength and depth, they could pick many teams. I was really pleased with my horse Bob, who is off to Luhmuhlen to do his first five-star. He has been phenomenal this year, so I am looking forward to it.”

Discussing the significance of The Nations Cup Series, McEwen said: “They are great for introducing younger people on teams. It’s a good way for them to gain experience and also for everyone to get the swing of things when it comes to team competitions. Otherwise, it comes around once a year and it all feels rather important.”