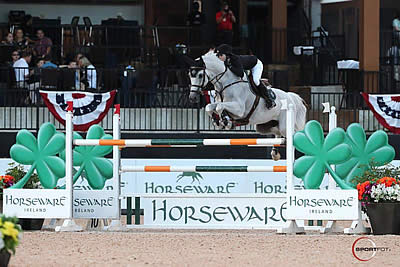 The course, designed by Ken Krome (USA), tested 30 entries in the class and had only six pairs return for the jump-off. Robitaille shared that she had anticipated more riders to make it into the jump-off when she originally walked the course: “I thought there might be more actually when I walked the course, but there seemed to be faults everywhere.”

Robitaille was proud to be one of the six to continue into the jump-off. “I thought it was a really fair course considering the field of riders and the courses that Kenny had. I thought he ended up with an ideal clear amount,” commented Robitaille.

The 2005 Dutch Warmblood gelding (Berlin x Irco Polo), owned by Bertram and Diana Firestone, has been paired with Robitaille for the past three years, allowing her to return to Grand Prix level competition. “I took a pretty big break from riding at the Grand Prix level – I was married and had two children. He [Ace] was the first horse I got to really get back into the upper level of the sport with,” Robitaille shared.

Since returning to the International Grand Prix level in 2017, Robitaille and Ace have represented the United States in the 2017 Nations Cup in Coapexpan, Mexico and also competed in the 2018 FEI World Cup Finals in Paris, where Robitaille made her fifth World Cup Final appearance and finished 14th overall. “I really missed it,” Robitaille admitted of the five year break she took from the international circuit.