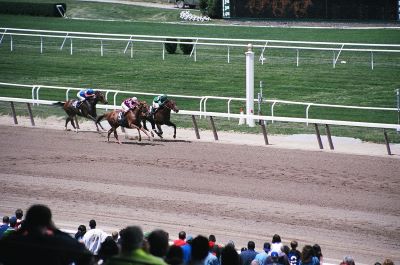 2021 has been another huge year for the horse racing industry worldwide. While many great events took place, the two main series in the United States were the Triple Crown in the spring and the Breeders’ Cup in the fall.

The Triple Crown began in May, making it one of the two most important months on the horse racing schedule. Online horse betting has reached a peak, including many options for betting on the go using horse betting apps such as these: https://horse-betting.pro/guides/best-horse-betting-apps/.

The Triple Crown series of races are traditionally run in May and early June of each year, although global events have resulted in schedule adjustments, such as in 1945 and 2020.

On the first Saturday of the month of May, and the first of the Triple Crown series, the legendary Kentucky Derby takes place at a distance of a mile and a quarter. With a purse of some $3 million and a huge worldwide following, the Derby is one of the top horse events on the planet.  Thunderous applause can be heard from afar during the Kentucky Derby at the gorgeous Churchill Downs (Kentucky).

It is dubbed “The Run for the Roses,” stemming from the blanket of roses draped over the winner, and in the United States it is also known as “The Most Exciting Two Minutes in Sports” or “The Fastest Two Minutes in Sports” because of its approximate duration. It is the first leg of the American Triple Crown, followed by the Preakness Stakes, and then the Belmont Stakes.

Three weeks after the Derby comes the Preakness Stakes at Pimlico Racecourse in Baltimore, Maryland with a distance of 9.5 furlongs (1+3⁄16 miles (1,900 m)) on dirt. It has been dubbed “The Middle Jewel of the Triple Crown.”

The Preakness Stakes has also been termed “The Run for the Black-Eyed Susans” because a blanket of Maryland’s state flower is placed across the withers of the winning colt or filly. Attendance at the Preakness Stakes ranks second in North America among equestrian events, surpassed only by the Kentucky Derby.

An interesting history of the Preakness is that Pimlico officially opened October 25, 1870 with the colt Preakness winning the first running of the Dinner Party Stakes. Approximately 12,000 people attended, many taking special race trains arranged by the Northern Central Railway. Three years later the horse had the 1873 Preakness Stakes named in his honor.

The final leg in the American Triple Crown, open to three-year-old Thoroughbreds, is the Belmont Stakes, known by the nicknames “The Test of the Champion”/”The Run for the Carnations”/”The Third Jewel of the Triple Crown.”  The Belmont Stakes takes place on the first Saturday in June in Elmont (an unincorporated hamlet), New York.

When run at 1+1⁄2 miles, the Belmont Stakes covers one full lap of Belmont Park, known as “The Championship Track,” because nearly every major American champion in racing history has competed on the racetrack. Despite the distance, the race tends to favor horses with tactical speed: relatively few winners close from far behind the early leaders.

The 2021 Belmont Stakes was the 153rd running of the Belmont Stakes and the 110th time the event took place at Belmont Park. It is the final race of the Triple Crown.

The Triple Crown has come to represent the pinnacle achievement in horseracing. In its history, only 13 horses have won all three races; two of them are still alive.

Ending at one finish line is the of the Breeders’ Cup World Championships, an annual series of Grade I Thoroughbred horse races held on the first weekend of November.  These races are operated by Breeders’ Cup Limited, and in 2021, The Breeders’ Cup will return to another iconic racing venue: Del Mar, where the turf meets the surf Southern California style.

The event was created as a year-end championship for North American Thoroughbred racing, and also attracts top horses from other parts of the world, especially Europe.

With the current 2021 year having $31 million in purses and awards, every horse, jockey, trainer, and owner around the world has this two-day, 14-race, year-end culmination of the Breeders’ Cup World Championships in their sights.

Many Breeders’ Cup winners will go on to win the Eclipse Award in their respective division. For example, of the eleven flat racehorse categories, seven of the Eclipse winners in 2015 had also won a Breeders’ Cup race, while three others were in the money.

The Breeders’ Cup Championship Saturday is one of the richest days in racing awarding over $22 million in purses and awards over 9 races, culminating in the defining event of the international racing season, the $6 Million Breeders’ Cup Classic.