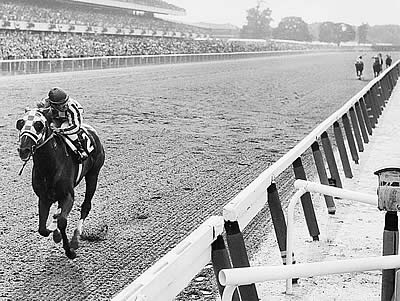 Bookmaking, the process of taking bets, calculating odds, and paying out winnings, was banned in the early 20th century, but pari-mutuel betting, introduced in 1908, restarted the racing industry. Free live horse race video streaming of all horse and greyhound races across the world is available using the BetAmerica promo code. BetAmerica will give you content that is gathered from the thoroughbred, quarter horse, harness horse, and greyhound tracks from across the county – all major race courses, so you don’t miss a race.

The traditional high point of thoroughbred US horse racing is the Kentucky Derby, held on the first Saturday of May at Churchill Downs in Louisville, Kentucky. Together, the Derby, the Preakness Stakes, held two weeks later at Pimlico Race Course in Baltimore, Maryland, and the Belmont Stakes, held three weeks after the Preakness at Belmont Park on Long Island, form the Triple Crown of Thoroughbred Racing for three-year-olds. They are all held early in the year, throughout May and the beginning of June.

The Breeders’ Cup event is held in late October or early November at different race tracks every year. It receives less attention than the Triple Crown series from the general public but is of great importance in determining the American Horse of the Year and annual Eclipse Award divisional winners. It is normally held at a different track every year, though some racetracks have held back-to-back renewals. It currently consists of thirteen races held over two days with total prize-money of $28 million. 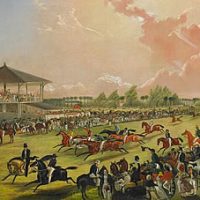 In the United States, Thoroughbred flat races are run on either dirt, synthetic, or turf surfaces. Other tracks offer Quarter Horse racing and Standardbred (Harness) horse racing, or combinations of these three types of racing surfaces.

Quarter horse racing began in 1674 in Henrico County, Virginia. Each race consisted of only two horses and they raced down the village streets and lanes. The Quarter Horse received its name due to the length of the race as the races were indeed a quarter of a mile, or 400 meters. The breed of horse was developed so they could get off to a quick start and win the race.

American Thoroughbred races are run at a wide variety of distances, most commonly from 5 to 12 furlongs (0.63 to 1.50 mi). The shorter distances are more common but the mid-to-long distance races tend to be higher in prestige. Breeders of Thoroughbred race horses attempt to breed horses that excel at a particular distance.

Harness racing is a form of horse racing in which the horses race at a specific gait (a trot or a pace) and are pulling a two-wheeled cart called a sulky, occupied by a driver. In North America, harness races are restricted to Standardbred horses.

Standardbreds are so named because in the early years of the Standardbred stud book, only horses who could trot or pace a mile in a standard time (or whose progeny could do so) of no more than 2 minutes, 30 seconds were admitted to the book. The horses have proportionally shorter legs than Thoroughbreds, and longer bodies. Standardbreds generally have a more placid disposition, due to the admixture of non-Thoroughbred blood in the breed.

Almost all North American races are at a distance of one mile. North American harness horses earn a “mark” (a record), which is their fastest winning time at that distance. Harness races involve a good deal of strategy.