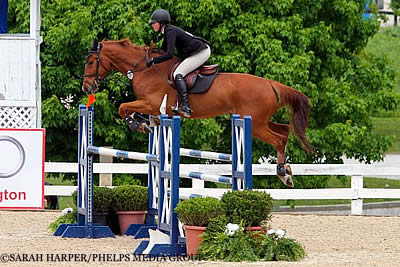 Lexington, Ky. – May 20, 2016 – Hunter Holloway showed her skills in the Kentucky Spring Classic, bringing home wins in both the hunter and jumper rings.

In the Medium Junior Jumpers, Holloway took home the victory aboard Italia, a 7-year-old Dutch Warmblood gelding, with a time of 51.098 seconds, a full four seconds faster than second place finishers Ashley Hartman and Clear Lady.

It was a meaningful win for Holloway, who has done the majority of the training on the home-bred Italia.

“It was pretty exciting,” said Holloway. “He is 7 years old and we bred him. “Lisa Oliver broke him when she worked for us, but since then I’ve been the one on him. I did his first jumps, his first courses – everything. It’s pretty special now to have him moving up into the Medium Juniors. We were planning on having a nice, fast, smooth round. He stepped up to the plate great.”

After her win in the jumper ring, Holloway headed over to the Stonelea Ring and brought home a win in the WIHS Equitation Hunter Phase with Orion, a 12-year-old Westphalian gelding.

“The plan was just to have a nice round,” said Holloway. “We want to keep getting qualified for finals here. Orion is amazing; I don’t think he gets enough credit. He’s kind of the horse that does all the work, and then we pull Sunny out for finals. Everyone knows Sunny and I as such a good pair, but no one ever realizes how good Orion is.”

She continued, “He’s the one that gets me qualified every year – that does all the work – and he’s for sale this year. He’s a great horse. He’s a blast to ride.”

Holloway was enthusiastic about her first trip to the Kentucky Spring Classic.

“This is actually my first time being here during the spring shows,” Holloway said. “It’s a beautiful facility. They do a great job with the show and the management is great. The weather could be better but it’s been great.”

The Kentucky Spring Horse Shows allowed for Holloway to spend more time in the jumper ring as well as continuing with the hunters.

“This year our focus is more on the jumpers,” Holloway explained. “Mom and I both will hopefully be doing more of the FEI classes. We’re trying to do more World Cup qualifiers and more big classes.”

Madison Dehaven and Chanel brought home the win in the Low Amateur-Owner Jumpers for the second week in a row with a time of 24.013 seconds, a full two seconds faster than second place Alexandra Duval and XM.

Dehaven was full of praise for Chanel, her 8-year-old Irish Sport Horse mare.

“I was very happy with her today,” Dehaven said. “Everything kind of came up like I wanted it to. I’m really learning to ride her on a nice rhythm. She wants to go forward and gallop, and for me that was really hard to get used to.”

From the start, Dehaven made a plan that paid off in time saved.

“I really liked the course,” said Dehaven. “There were a couple of challenging things for her. In the jump-off, there was a right rollback, and she’s a lot harder off the right. I would say that plank to the last fence was where I made up time. I had planned eight strides down the last line, but we were in a nice gallop and I caught the plank and the seven was just there. I left out to the last oxer and she was really good.”

The Kentucky Spring Classic, running through May 22, features a FEI CSI3* rating. On Saturday, May 21, riders will compete under the lights in the Rolex Stadium during the $130,000 Mary Rena Murphy Grand Prix. All three FEI classes held during the Kentucky Spring Classic count for the Longines Ranking List and the Saturday classes will also count for the Rolex/USEF Show Jumping Ranking List. In addition, the featured national classes will be the $50,000 Bluegrass Grand Prix, which counts towards the Rolex/USEF Show Jumping Ranking List, and the $25,000 Under 25 Grand Prix to be held on Sunday, May 22, in the Rolex Stadium.

Sixteen-year-old Annabel Revers of Weston, Massachusetts, rose to the top of 16 entries in Friday’s ASPCA Maclay horsemanship class in the Stonelea Ring at the Kentucky Spring Classic aboard Beechwood Stables LLC’s Quax.

Revers and Quax are frequent blue ribbon holders in the equitation ring, and even won the same class together at the 2015 Kentucky Spring Classic.

“It was a really nice way to start the weekend and to start my first show back after the winter,” said Revers. “I just tried to ride it really smooth and relaxed. It wasn’t too technical.”

Revers piloted the 13-year-old Oldenburg gelding around the equitation course, made up of 10 fences, under the guidance of trainer and Olympic gold medalist Peter Wylde. The track consisted of challenging bending lines, single obstacles, an in-and-out and a large log wall fence leftover from the $15,000 USHJA International Hunter Derby during the Kentucky Spring Horse Show.

Despite the over fences test Revers was tasked to complete as well as the rainy weather seen during the class, she rode a flawless and fluid round that undoubtedly impressed the judges.

Revers’ equitation caught the judges’ attention once again during the flat portion of the class, where she secured the first place spot.

“I’ve had Quax for about a year and half now,” said Revers. “We got him as a jumper and over the past year and a half we’ve been turning him into an equitation horse. He was really good today. I was really happy that he stayed relaxed and was really good and did his job.

“The rain didn’t bother him at all,” continued Revers. “He was great and was super brave at the hunter derby fence; I was really happy with that.”

“I love riding in the field when we’re not showing,” said Revers. “That’s one of my favorite parts about coming here. The grounds are really nice, and it’s just a really nice place to be!”

This class was only the second time Hill had ever ridden and shown the 6-year-old Selle Français gelding, but the pair proved to be top contenders in the competitive junior equitation ring.

“I didn’t really have a plan,” said Hill. “I’ve only ridden the horse twice so it was just kind of however it goes. He’s only 6 years old so I had to make up my plan as I went, but he was really good. He really showed himself in the ring so I’m really happy with him.

“He’s very brave,” continued Hill. “He used to do the jumpers a couple of months ago. He gets a little bit upset with the rain, but he held through it pretty well.”

“I moved here in June,” said Hill. “We bought a farm like ten minutes from here. I love showing in the Rolex Stadium on my jumpers. This is a great place to come!”

The Kentucky Spring Classic will continue through May 22 with the $5,000 Hallway Feeds USHJA National Hunter Derby in the Stonelea Ring on Saturday, May 21, while also offering WIHS and NAL qualifiers plus $10,000 Show Jumping Hall of Fame Classics.

Kentucky Horse Shows is also pleased to host a book signing with George H. Morris for his newly released autobiography, Unrelenting: The Real Story: Horses, Bright Lights and My Pursuit of Excellence.

The book signing will be held on Saturday, May 21, during the $5,000 Hallway Feeds USHJA National Hunter Derby at the Stonelea Ring.

Come and meet legendary horseman George Morris, take a photo and purchase a signed copy of George’s autobiography, which illustrates the story of his life, from the very public to the incredibly private, while also enjoying hunter derby action from the second leg of the $40,0000 Hallway Feeds USHJA National Hunter Derby series!