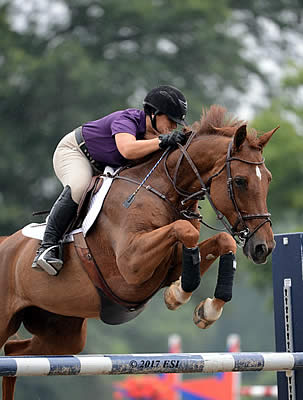 The venue greeted exhibitors with refreshed footing in the showing rings and schooling areas, and altogether revitalized grounds to compliment the experience that is unique to competing in the heart of Virginia Horse Country.

Showday National has drawn Exhibitors from afar such as Britt McCormick, head trainer at Elmstead Farm in Plano, Texas, who hadn’t been to Culpeper in several years. He noted, “The place looks great. The footing and rings are good, and everything is super.” McCormick has successfully trained horses for over 25 years, and he is a USEF licensed R judge, and USEF licensed R course designer.

The opening day Jumper ring highlight, the $5,000 1.40m Open Welcome, featured an inviting course designed by Sergio Lopez from Colombia, South America. Tracy Magness, the head trainer/rider at Lake View Farm in Hughesville, Maryland, collected the top honors atop IBENZ VAN HD. The pair was one of only two double clear rounds. Magness said that some of the lines posed tricky and technical questions, but not unfair. “I thought it was a good course, and the footing was nice.”

IBENZ VAN HD, also known as CANDY around the barn, is a nine-year-old mare owned by Mr. & Mrs. John Bartko.  Magness said she imported the mare in August of last year from Belgium. “I think it takes a year to really get to know a horse totally, but we kind of hit it off right away,” remarked Magness. “I’ve just been learning her, and what works best for her, but she is quite consistent and we’ve had some pretty good placings.” New York-based Debbie McCarthy Connor placed second on ZIM.

Patty Foster and her sister Mary Lisa Leffler, of Rolling Acres Show Stables in Brookeville, Maryland, dominated the Green and Performance Hunter Divisions collecting wins with CLASSIC, CHARMING, INCOGNITO, and WHISPER WIND. But even more meaningful than blue ribbons, Foster was delighted to have her sister “back in the ring”. On March 1st, Leffler had broken her leg so badly that it placed her future riding ability in jeopardy. Foster noted, “The doctors put a rod in, and they said it’s amazing how good she looks.”

On Tuesday, Ken Krome arrived in Culpeper where rainstorms had soaked the grounds. “I saw the drain tiles flowing at the edge of the rings and everything looked great,” he noted. After he settled in, all of his horses were schooled in the new footing which deterred the water so well. “The horses were confident jumping, and they’ve all done well for us — everything has been made more comfortable for the horses.”

EGO, ridden by Krome for owner Chelsea Director, earned the tri-color Reserve Championship in the Green Hunter 3’ Division on Opening Day. Krome is quite fond of Ego. “He’s just a cool horse, who is very attentive and really loves what he does. He wants to do everything right,” praised Krome. “Ego is a special horse, and I just really appreciate a horse that wants to do what you want to do and he’s great to work with. He’s fun.”

Krome is the head Trainer/Rider at K2 Show Stables in Brookeville, Maryland. He is credentialed as an FEI-3 rated Course Designer and a USEF “R” rated Judge and Course Designer.