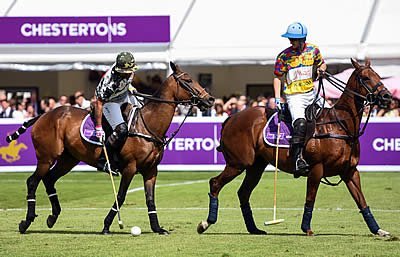 The sunshine arrived just in time for the opening day of Chestertons Polo in the Park. Crowds from all over London flocked to the historic Hurlingham Park for four games of fast and furious polo, accompanied by luxury bars, including the picturesque Champagne Lanson Garden and a selection of London’s top pop-up restaurants. The Mahiki VIP was bursting with celebs, including Hugo Taylor and Lucy Mecklenburgh, as guests were treated to thrilling polo clashes alongside off-pitch entertainment.

Renowned for its world-class polo in the heart of the city, the highlight of the opening day of Chestertons Polo in the Park was undoubtedly the International match. History was made as Champions Polo League India strode onto to the hallowed turf for the first time in over 70 years, led by HH Maharaja Padmanabh Singh. ICM Capital Team England also re-wrote history as Hazel Jackson became the first-ever female to play at Chestertons Polo in the Park.

Hoping to improve on their previous results, ICM Capital Team England was first to reach the score board with a short strike from Jack Richardson, in a scintillating opening chukka. The lead was short-lived as HH Maharaja Padmanabh Singh proved why he is one of the best, not only showing strength in defence but also setting up a breathtaking goal for his teammate, Dhruv Pal Godara to widen the gap for his team giving them a lead that looked as though it would not be relinquished. Jack Richardson tried his hardest to cut the deficit in the third quarter but HH Maharaja Padmanabh Singh’s team was too strong and a stunning goal from Simran Singh Shergill extended the lead to 6-3. In a nail-biting final chukka, noise erupted from the stands as ICM Capital Team England’s Nacho Gonzalez struck a two-pointer to level the scores. The clock ticked down, with pressure on both sides, neither wanting to go home empty handed. In the final moments, it was the first ever lady player to compete at Chestertons Polo in the Park, Hazel Jackson, who sealed the victory for ICM Capital Team England, much to the delight of the packed grandstand. For the first time since the International match’s inception in 2015, ICM Capital Team England lifted the much-heralded Olympic Trophy.

Hazel Jackson commented on the victory afterwards. “It was super intense, but probably one of the most fun tournaments I have ever played. We were so lucky to bring the win home. There is just so much atmosphere here, so much enthusiasm and competition – the level is absolutely epic, so it’s a different story here. It was amazing to have so much support and rock on the girls; they loved it and I loved it.”

The day’s action kicked off with an electric first game, as EFG Team Zurich clinched the victory over Mauritius Team Port Louis. Chris Hyde was the hero in the first two chukkas, scoring an impressive hat-trick to take an early 3-1 lead. Mauritius Team Port Louis entered the third chukka with a new-found energy and following an impressive two goal strike they took the lead, and headed into the fourth and final chukka with a 4-3 lead. Playmaker, Chris Hyde, remained cool and calm under pressure to produce nifty steal and take the scores back to level at four-a-piece. A controversial penalty goal was awarded to Mauritius Team Port Louis with less than two minutes remaining on the clock to take back the lead, but it was short lived as Paco O’Dwyer showed his enviable skills to score a two-goal strike and seal the victory for EFG Team Zurich. Final Score 6-5 to EFG Team Zurich.

EFG Team Zurich patron, Chris Hyde, spoke of the closely fought victory. “We had a great start because Hissan got the first play; we went for the win in the first two chukkas. But then obviously it’s a strong team: three professional players. In summary, Max and I had an outstanding match, Hissan was a bit reserved because he has to play the next game – we’ll see how it is tomorrow with Max Charlton.”

The second game saw Air Europa Team Buenos Aires take on Argentex Team Dubai. The match got off to an exhilarating start as Juan Cruz Guevara led his team to a mammoth 4-0 lead, scoring two two-point goals almost consecutively. Soon into the second chukka an immense display of teamwork allowed George Spencer-Churchill to hit a clean shot at goal, scoring the third two-pointer of the game taking it to 4-2. This was followed by another soon after, to draw level at the end of the second chukka. Entering the second-half of the match, Juan Cruz Guevara stormed past his opponents to hook the ball under the neck of the horse, scoring a textbook goal, taking Air Europa Team Buenos Aires to a short-term lead. Responding to this, Argentex Team Dubai entered the fourth and final chukka with sheer determination to battle back and take the victory 9-7.

Home favourite, George Spencer-Churchill, commented, “It was a fun day at Chestertons Polo in the Park. It was a good win after going 4-0 down – it’s always the most satisfying victory when you win that way.”

There was a controversial start to the home side’s match as MINT Team London was penalised in the opening sequence, resulting with a two-goal penalty awarded to Whitley Neill Team Cape Town, which was pushed over the line by Oscar Mancini to give them the early advantage. Home favourite, George Meyrick, responded in style showcasing unbelievable skill as he volleyed the ball down the pitch to get the first points on the score board for MINT Team London. Despite Whitley Neill Team Cape Town taking the early lead, MINT Team London made their intentions clear from the outset, with Malcolm Borwick parading his much-vaunted power and tenacity to take MINT Team London into a clear lead before the end of the second chukka. MINT Team London continued their form in the final two chukkas to claim a clear victory with a final score of 7-4.

MINT Team London star, Malcolm Borwick, spoke of the victory. “MINT Team London had a good one today; we played really well. Huge effort from Rory Heron and the team to put on such an amazing event here in the middle of London. It has become such an iconic event and I feel honoured to play in it. We have a really tough semi-final against two of the best arena players in the world but I hope we win and hopefully will get to the final on Sunday.”