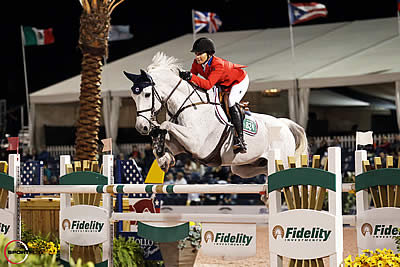 Wellington, Fla. – A young Hermès U.S. Show Jumping Team entered the arena full of fire as they kept up with the seasoned Irish team the entire night to earn the Silver medal in the $150,000 FEI Nations Cup™ at CSIO4* Wellington on Friday, March 3. In her Nations Cup debut, Catherine Tyree and mount Bokai gave a remarkable double-clear effort to lead the U.S. team of Georgina Bloomberg, Chloe Reid, and Ali Wolff. The U.S. ended on 13 faults behind Ireland’s Gold medal four-fault finish. Brazil earned the Bronze medal on 16 faults.

“I am thrilled with how my horse went, and I could not ask for more. He has such a great character and such a great mind that I knew once I went into the ring that everything would be okay. I jumped the first jump and it felt like every other class that I have been to so far down here [in Wellington]. I couldn’t be happier,” said Tyree.

The U.S. put in a strong first round, accumulating only five faults. Wolff (New Albany, Ohio) and Casall, Blacklick Bend Farm’s 2005 Holsteiner gelding, led off for the team with a clear jumping effort and just one time fault. Tyree (Chicago, Ill.) and Bokai, Mary Tyree’s 2006 KWPN gelding, followed with their first clear round performance. Reid (Washington, D.C.) and Codarco, Team Reid, LLC’s 2007 Irish Sport Horse stallion, and Bloomberg (New York, N.Y.) and Lilli, Gotham Enterprizes, LLC’s 2004 Deutsches Sportpferd mare each had four faults, allowing for one four-fault drop score. The course determined podium contenders early as the U.S. rested comfortably in third place with an 11-fault lead over Argentina and Great Britain heading into the second round. Ireland and Brazil were tied for first with zero faults.

Wolff and Casall began the second round with eight faults, dropping a rail at jump three, the Hermès oxer, and jump four, the liverpool. However, Tyree and Reid came through with back-to-back clear rounds. With Ireland and Brazil still in position to win, Bloomberg needed to go clear for a possibility of a victory. Unfortunately, the Pan American Games Team Bronze Medalist snagged rails at the Hermès oxer and fence eight, the Hollow Creek vertical, for eight faults. Mimicking his performance in last month’s FEI Nations Cup at CSIO4* HITS Ocala, Olympian Cian O’Connor went double-clear to solidify the Gold medal for Ireland.

“We had a young team with great veteran stability. The two veterans [Ali and Georgina] imparted a lot of confidence. With a team, it is not just about what they do on a horse; it is how they interact with one another. Everyone meshed really well together this week,” added Ridland.