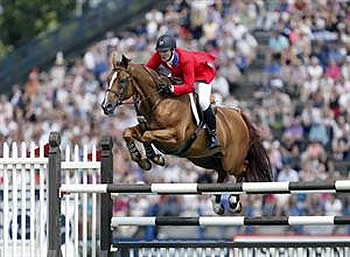 Hickstead, United Kingdom – The Hermès U.S. Show Jumping Team produced another impressive performance in Nations Cup competition on Friday. Two weeks after jumping to a second-place finish in the Mercedes-Benz FEI Nations Cup at CSIO5* Aachen, the United States went one better to win the Furusiyya FEI Nations Cup of Great Britain presented by Longines at CSIO5* Hickstead. Led by Chef d’Equipe Robert Ridland, the team of McLain Ward, Reed Kessler, Margie Engle, and Beezie Madden finished on an overall total of four faults after two rounds of jumping over Kelvin Bywater’s 12-obstacle track. In round one, the U.S. came out firing on all cylinders to finish round one on a clean sheet and maintain its top form to add only four faults in the second round.

“They were brilliant as a team – no other way to describe it,” said Ridland of his team of Friday.

Ward (Brewster, N.Y.), riding Sagamore Farms’ 13-year-old Warmblood gelding, Rothchild, jumped in his customary lead-off position for the U.S., which had drawn second in the order. As he has done in numerous Nations Cups over the years, the two-time Olympic Gold medalist produced a faultless round, setting the tone for the day.

Jumping second in the order were the 2012 Olympic Games veterans Kessler (Lexington, Ky.) and Cylana. Kessler Show Stables’ 12-year-old Belgian Warmblood mare looked poised to produce a duplicate clear round, but rails on the latter half of the course, at eight and 10B, meant the pair would be the drop score in round one with eight faults.

Engle (Wellington, Fla.) was next up for the U.S. with Elm Rock Partners, LLC’s Royce. The Olympic and World Championship veteran demonstrated all of her experience as she guided the scopey 10-year-old Oldenburg stallion to a fault-free effort.

As the anchor rider, Madden (Cazenovia, N.Y.) knew that if she could also produce a clear, the U.S. would head into round two on a score of zero. The 2013 Rolex FEI World Cup Jumping Final champion did just that with Abigail Wexner’s 12-year-old Belgian Warmblood gelding, Cortes ‘C’, jumping an immaculate fault-free round that never looked in doubt.

Ward and Rothchild again jumped first for the United States, replicating their faultless first round performance to be one of only five combinations to produce a double-clear on Friday.

Jumping in the second and third spots were Kessler and Engle, respectively, who both produced four-fault performances in round two. Kessler and Cylana had an improved trip in their return effort, lowering the plank at fence four, Engle and Royce’s chance to add their names to the double-clear list were spoiled when they faulted jumping out of the double at six.

Madden, who recently returned to competition after spending two months out of the saddle due to a broken collarbone, entered Hickstead’s prestigious arena needing to produce a clear round in order for the U.S. to avoid a jump-off with The Netherlands and Germany. Just as in round one, Cortes ‘C’ made light work of the 12-effort track to join the list of five double-clears and clinched victory for the United States.

The U.S. is using Nations Cup competition at CSIO5*s Rotterdam, Aachen, Hickstead and next week in Dublin as preparation for all 10 members of the Hermès U.S. Show Jumping Short List for 2014 Alltech FEI World Equestrian Games ahead of the World Championships as well as the Furusiyya FEI Nations Cup Final in October.

“We’re here for preparation and we’re in great shape, to have all 10 (short list members) here at these shows is great,” said Ridland. “Preparation is going as well as we could hope for.”

The Netherlands and Germany tied for second place in the Furusiyya FEI Nations Cup of Great Britain presented by Longines on eight-fault totals.