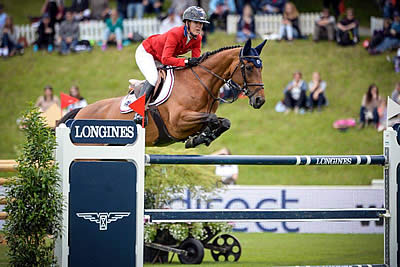 St. Gallen, Switzerland – The Hermès U.S. Show Jumping Team tied for the Silver medal with France, Germany, and Sweden in the Furusiyya FEI Nations Cup™, presented by Longines, at CSIO5* St. Gallen on Friday. Under the guidance of Chef d’Equipe Robert Ridland, the team of Lucy Davis, Margie Engle, Lauren Hough, and Todd Minikus rode against stiff competition in Switzerland to finish on 12 faults. This marks the third Silver-medal performance for the U.S. in three weeks, with the same team placing second at CSIO5* La Baule and the team of Kent Farrington, Laura Kraut, Callan Solem, and McLain Ward also placing second at CSIO5* Rome. All three competitions served as observation events for members of the Short List for the 2016 U.S. Olympic Show Jumping Team.

“It went great today. It is almost every week where we have the same reaction to how the day went,” said a pleased Ridland. “We were up against strong teams. This is now our sixth Nations Cup of the year since Ocala, which is more Nations Cup than anyone else here. We have been on a streak that is working out pretty well; we have kept the streak alive, and we are pretty happy. Lauren [Hough]’s double-clean round was fantastic.”

Eight nations rode over a substantial but straightforward course designed by Switzerland’s Gerard Lachat. With the U.S. team going second in the order, Hough (Wellington, Fla.) and Ohlala, The Ohlala Group’s 2004 Swedish Warmblood mare, earned the first clear round of the day in the Nations Cup. Davis (Los Angeles, Calif.) was next for the U.S. with Old Oak Farm’s Barron and incurred four faults when the 2004 Belgian Warmblood knocked a rail at fence five, the vertical following the open water. Engle (Wellington, Fla.) and Royce, Elm Rock Partners, LLC’s 2004 Oldenburg stallion, knocked a rail early on in their round at fence three, as well as one of the problematic fences on course, the plank oxer at fence 11, for an eight-fault round. Riding in the anchor position, Minikus (Loxahatchee, Fla.) had a solid round with Babalou 41, Jack Snyder and Two Swans Farm’s 2005 Oldenburg mare, but had an unlucky rail at 7A of the triple combinations for four faults. Following round one, the U.S. was in a three-way tie for second with Ireland and Switzerland on eight faults.

Heavy rain came down during round two, adding an additional factor to navigating a clear round, but the U.S. team was able to deliver solid performances. Hough and Ohlala set the tone with another faultless performance, earning one of four double-clear rounds. Davis and Barron improved to have a lovely clear round. Engle put in a determined effort with Royce, but a late-falling rail at fence eight, the oxer after the triple combination, gave the pair four faults. Minikus rode Babalou 41 well under the pressure, but had a rail at fence 11. The U.S. Team finished two rounds in an impressive field on 12 faults. Ireland edged out the competition to claim top honors in the Nations Cup on eight faults.

Hough was thrilled with her talented partner, saying, “Ohlala jumped amazing today. It was difficult conditions, more towards the second half of the day, but she felt very, very good in the first round and even better in the second round.”