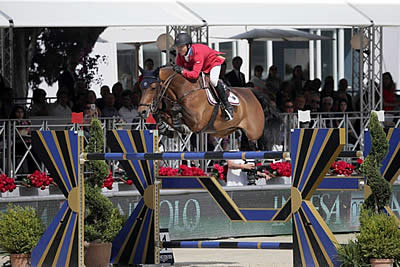 Rome, Italy – The Hermès U.S. Show Jumping Team tied for the Silver medal with France in the Furusiyya FEI Nations Cup presented by Longines at CSIO5* Rome in Italy on Friday. Led by Chef d’Equipe Robert Ridland, the team of Kent Farrington, Laura Kraut, Callan Solem, and McLain Ward battled through a tough competition to finish on 12 faults. This marks the second Silver-medal performance for the U.S. in two weeks, having placed second at CSIO5* La Baule where the U.S. was represented by Lucy Davis, Margie Engle, Lauren Hough, and Todd Minikus. Both competitions served as observation events for members of the Short List for the 2016 U.S. Olympic Show Jumping Team. Great Britain won the Nations Cup at Rome for the second consecutive year on a total of four faults.

“Second-place in this company is good,” said Ridland. “We always want to win and were in position to win both [at La Baule] and here, but we are happy with the performance today. Out of the five Nations Cups we have competed in this year, we have been in the top two in all of them and have done so with 19 different horses. There were some great athletes here and we are very pleased with the overall result.”

Course designer Uliano Vezzani presented a large, straightforward 5* track that proved to require every bit of determination to produce a clear round. Leading off for the U.S. in round one with a clear effort was Farrington (Wellington, Fla.) and Amalaya Investments’ 2002 KWPN gelding, Voyeur. Entering the arena next for the U.S. was Solem (Glenmoore, Pa.) and Horseshoe Trail Farm, LLC’s VDL Wizard, a 2003 KWPN gelding. The pair got out of their rhythm a bit mid-course and had rails at fences 6 and 8A. Kraut (Royal Palm Beach, Fla.) and Old Willow Farms, LLC’s 2007 Holsteiner mare, Zeremonie, had a solid round, but tipped a rail down in the triple combination at fence 4B. Team anchor Ward (Brewster, N.Y.) expertly guided Double H Farm & Francois Mathy’s HH Azur over the course and through the timers with zero faults in the 2006 Belgian Warmblood mare’s first Nations Cup appearance. The U.S. entered round two on four faults, tied for second with Italy, The Netherlands, and France.

Round two proved, as always, to be influential, with almost half the number of clear rounds turned in as seen in round one. Farrington and Voyeur were again in good form, but had an unlucky rail at the final fence. Both Solem and VDL Wizard and Kraut and Zeremonie had the rail at fence 7, a tall skinny, down, giving the U.S. a total of eight faults. The pressure was on Ward and HH Azur as the final combination for the U.S. and they delivered a foot-perfect clear round, giving them one of only four double-clear efforts in the field. With Great Britain sitting on four faults, anchor rider John Whitaker needed to produce a round with no more than seven faults to avoid a three-way jump-off between Great Britain, the U.S., and France. Whitaker never looked in doubt, delivering a double-clear effort and the win for Great Britain.

Ward was very pleased with his talented young mare, posting a double-clear performance in her first Nations Cup. “I thought she was incredible, as she has been,” said Ward. “She is amazing and came here and performed how I thought she would. We are very pleased with the team. [Another] second-place finish is a good step on the road going towards the Olympic Games.”

Find out more about CSIO5* Rome