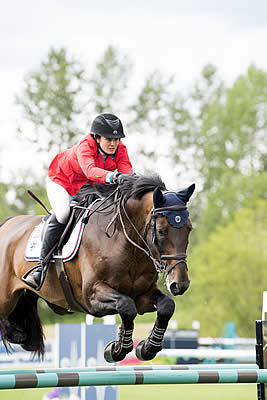 The results of Friday’s Nations Cup competition will determine which Nations qualify for the global series Final in Barcelona, Spain at the end of September.  The U.S. starts the final qualifier with a slim lead over Canada and Mexico, but will need a strong performance to secure qualification. Only the top two Nations in the League will earn their way to the Final.  With five teams competing, it will be an exciting day of jumping and calculating as the teams continually assess what is needed to secure qualification.

Under the experienced guidance of Robert Ridland, Chef d’Equipe, the U.S. athlete/horse combinations will compete in the following order:

Heather Caristo-Williams and Qui Vive Des Songes Z: Aboard the 2006 Zangersheide stallion, owned by Holly and Ralph Caristo, Caristo-Williams (Saugerties, N.Y.) brings breadth and stamina to the team. The combination already has two top-10 placings in 2017, including the $86,000 WEF Challenge Cup during week 12 of the Winter Equestrian Festival.  The pair looks to be in good form heading into their Nations Cup debut.

Catherine Tyree and Bokai: Competing in only their second Nations Cup, Tyree (Chicago, Ill.) and Bokai look to continue their success in Langley after contributing to a second-place finish at FEI Nations Cup CSIO4* Wellington in March. Mary Tyree’s 2006 KWPN gelding and Tyree jumped back-to-back clear rounds in their Nations Cup debut, bursting onto the scene as a combination to watch in 2017 and beyond.

Adrienne Sternlicht and Cristalline: Sternlicht (Greenwich, Conn.) and the 2008 Starlight Farm 1 LLC.’s Bavarian Warmblood mare recently aided the Hermés U.S. Show Jumping Team in their silver-medal finish in CSIO4* Coapexpan, Mexico where Sternlicht debuted the prestigious pink coat for the first time. This up-and-coming rider has a list of accolades, including five top-10 placings in 2016 aboard Cristalline.

Margie Engle and Royce: Riding Gladewinds Partners, LLC’s 2004 Oldenburg stallion, Engle (Wellington, Fla.) will anchor the team with her wealth of experience and top placings across the globe. Included in her accolades are a top-10 finish at the 2000 Olympic Games in Sydney and competing in the 2011 and 2012 FEI World Cup™ Finals in Leipzig, Germany and Hertogenbosch, Netherlands. She and Royce most recently competed in the Hollow Creek Grand Prix during the Kentucky Spring Horse Show where they earned a fifth-place finish.

Talented teams of U.S. Children and Junior riders will compete in Team Competitions at CSIJCh Langley. A newly added FEI event for Child and Junior Riders, the CSIJCh is being held in conjunction with CSIO4* Langley. Looking to gain valuable experience in a team competition format at the international event, the Children’s and Junior’s Teams will face tough competition from the Canadian team on their home turf. The athlete/horse combinations for the Children’s team will compete in the following order:

Emma Callanan (Lebanon, N.J.) with her own Q Two, a 2000 Dutch Warmblood gelding

With slight changes to the roster for the Junior team, the athlete/horse combinations will represent the U.S. in the Junior competition, in the following order:

Both teams will compete under the direction of the U.S. Show Jumping Youth Chef d’Equipe/Technical Advisor DiAnn Langer.

Watch the live stream of the Children’s and Junior competitions on the TBird Live Cast.