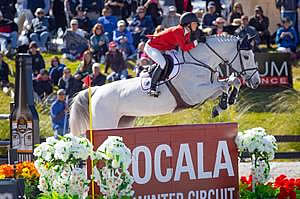 Ocala, Fla. – The Hermès U.S. Show Jumping Team put forth a determined effort in Friday’s Furusiyya FEI Nations Cup presented by Edge Brewing Barcelona at CSIO4* Ocala as they jumped to a second-place finish over Martin Otto’s 12-obstacle course. Led by Chef d’Equipe Robert Ridland, the squad of international veterans finished on a score of eight faults over the two rounds, just four faults behind the winning Irish Team, with Colombia finishing third on 12 faults.

Lauren Hough (Wellington, Fla.) led off for the U.S. with the Ohlala Group’s talented 12-year-old Swedish Warmblood mare, Ohlala. In both rounds the pair produced four-fault efforts, lowering rails at fence 11C and fence two in rounds one and two, respectively.

Jumping in the second spot for the Americans was Georgina Bloomberg (New York, N.Y.) with the scopey Juvina. Gotham North Enterprizes, LLC’s 14-year-old Austrian Warmblood mare produced one of six double clears to help the United States to a second-place finish.

“She’s really on form,” said Bloomberg of Juvina. “We’ve been saving her for this since we found out we were coming here and really made this a priority.”

Laura Kraut (Royal Palm Beach, Fla.) and Cherry Knoll Farm’s Cedric looked on track to produce clear trips in both rounds until the triple combination at 11. In round one, the pair incurred four jumping faults and a further two time faults for a refusal at the A element, and in round two a miscommunication in the two strides from B to C resulted in eight jumping faults and seven time faults for a rail and a circle after the combination.

“I’m so happy with Simon; he made my job really easy. I couldn’t have asked for anything more from him,” said Madden. “We were really supported by a great team today.”

The U.S. leads the North and Central America & Caribbean League in qualifying for the Furusiyya FEI Nations Cup Final after earning 100 points on Friday.

“There were a couple of odd things that happened today, but thank goodness for Georgina and Beezie with their double clears,” said Ridland. “Our number one priority was to get qualifying points (for the Final) and we did that.”