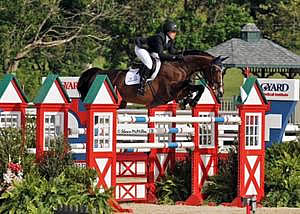 Wellington, Fla. – The Hermès U.S. Show Jumping Team heads into the Furusiyya FEI Nations Cup presented by G&C Farm looking to repeat its victory from last year and secure its sixth win in its home Nations Cup. A total of 12 teams are set to go head-to-head on Friday evening at the Palm Beach International Equestrian Center during the feature of CSIO4* Wellington, held in conjunction with the FTI Consulting Winter Equestrian Festival. Two members of the last year’s winning team, Laura Kraut and Beezie Madden, return in 2014 with rising star, Brianne Goutal, and two-time Olympic Gold medalist, McLain Ward, rounding out the U.S. effort. Chef d’Equipe Robert Ridland will lead the U.S. in its quest for victory on home soil.

The U.S. has drawn sixth in the order for Friday’s Furusiyya FEI Nations Cup presented by G&C Farm; the first round of team competition gets underway at 7pm ET.

Goutal made a name for herself when she was still in the junior ranks by completing a sweep of the four major U.S. equitation titles, which included the 2004 Platinum Performance/USEF Show Jumping Talent Search Finals-East, the 2004 Washington International Equitation Classic Finals, the 2005 USEF/Pessoa Hunter Seat Medal Finals, and the 2005 ASPCA Maclay National Championships. She has continued to demonstrate winning form in the jumper ring and was honored with the 2007 Maxine Beard Award, in addition to jumping on multiple U.S. Nations Cup teams. She heads into Friday’s Nations Cup competition on strong form, having placed fourth in Adequan Grand Prix CSI4* a week ago.

Kraut brings a wealth of experience to the U.S. effort after jumping on numerous Nations Cup teams, including representing the United States at the 2000 Olympic Games and winning Team Silver at the 2006 FEI World Equestrian Games. With Cedric, she helped the U.S. to the Team Gold at the 2008 Olympic Games, in addition to representing the United States at the 2010 Alltech FEI World Equestrian Games. The two-time Olympian will look to showcase the form that earned a third place in the overall standings of the 2013 Longines Global Champions Tour after winning in Wiesbaden with the diminutive grey gelding. The pair also helped the U.S. to jump to a second-place finish in the Furusiyya FEI Nations Cup at CSIO5* Rotterdam.

Madden enters the 2014 season as the reigning USEF Equestrian of the Year and FEI World Cup Final champion. The three-time Olympic medalist (Team Gold in 2004 and 2008 and Individual Bronze in 2008) and Team and Individual Silver medalist from the 2006 FEI World Equestrian Games was a major contributor to the United States’ success in 2013. In addition to helping the U.S. team win in Wellington, she aided in an American Consolation Round victory at the Furusiyya FEI Nations Cup Jumping Final at CSIO5* Barcelona with her World Cup champion, Simon. With Cortes ‘C’, she contributed to second-place Nations Cup efforts in Rotterdam and Hickstead and a third-place U.S. finish in Dublin.

Ward also brings a wealth of experience to the U.S. effort in Wellington as he joins his Gold medal-winning teammates from the 2008 Olympic Games, Kraut and Madden. Additionally, his resume boasts earning Olympic Team Gold in 2004, Team Silver at the 2006 FEI World Equestrian Games, and a second-place finish at the 2009 Rolex/FEI World Cup Final in Las Vegas. Ward and Rothchild were vital members for the U.S in the Consolation Round victory at the Furusiyya FEI Nations Cup Jumping Final, second-place efforts in Spruce Meadows and Hickstead, and a third-place finish in Dublin. They head into Friday’s Nations Cup competition on strong form after earning a fourth-place finish in the Fidelity Investment Grand Prix and a seventh-place finish in the FEI World Cup Grand Prix CSI-W5* presented by Rolex this year in Wellington.

Spectators and fans in attendance at the $75,000 Furusiyya FEI Nations Cup presented by G&C Farm are invited to a Team USA Nations Cup Pep Rally Reception hosted by the USET Foundation and the USEF from 6-7pm on Friday evening. To learn more about this event, visit: http://www.usefnetwork.com/news/10923/2014/2/11/junior_and_pony_riders_invited_to_g.aspx.