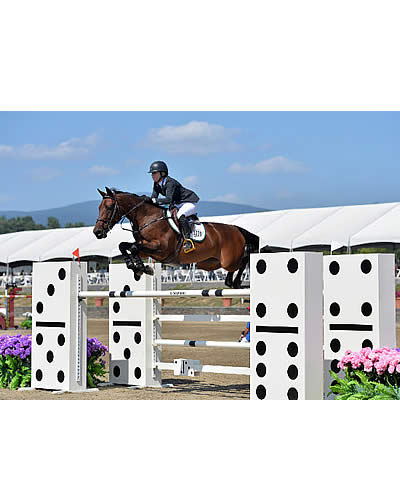 SAUGERTIES, NY (September 10, 2015): Hayley Waters, of Ocala, Florida, with Qurint, owned by Chuck and Dana Waters, wowed the show jumping world earlier this year winning the $34,000 FEI Jumper Classic at HITS Ocala V, and the unstoppable duo was back at it in Saugerties for the HITS Championship. They did it again, taking home another big check, this time in the Vetera® XP Vaccines $250,000 Junior/Amateur-Owner Jumper Prix.

On day one, forty-three riders took a turn over the first round course designed by Steve Stephens of Palmetto, Florida. The track challenged the junior and amateur riders, testing their skills with a potentially big payoff insight.

Day two began with the first few competitors struggling to go clear, but the day took a turn for the better when Emanuel Andrade and his own Clouwni, carrying only one fault from the previous day, sailed to a clean round. They stayed on top until Kelli Cruciotti, eighteenth in the order, rode Chamonix H, owned by Serenity Equestrian Ventures. Her clear round from day one put her in great shape going into the second round, and with just 1 time fault over the course, but with the faster time day one, she took the lead from Andrade.

Next up, Cormac Hanley and Stephex Stables and Missy Clark’s Twan took center stage. The first competitors to go clear in both rounds, they found themselves at the top of the leaderboard. Just two riders later, Waters and her trusty mount followed in Hanley’s footsteps and navigated through the course cleanly, ensuring a jump-off.

“I was nervous going in; it was a big track,” said Waters. “The triple away from the in gate was intimidating, but Qurint really covered it nicely.”

Catherine Tyree and Enjoy Louis, owned by Joseph and May Tyree, were twenty-third to reenter the ring. Ready to test Waters for the win, they had a great trip and a clear round, meaning three would return for the eight-effort jump-off.

First in the jump-off order was Hanley, but a refusal and a rail meant eight faults, plus one time fault, for a total of nine faults in a time of 47.745.

Next, Waters sailed through the course clearing everything in her sight and clocking in with a time of 44.217 for the lead. Tyree was the final trip of the day and she delivered a clean round in a fast 44.350, just a blink of an eye behind Waters for second place.

“I was really thinking about that triple combination going in. I was fortunate enough to be able to watch a lot of the people going before me,” added Waters after she received her blue ribbon. “I saw the trouble people were having with the triple and the six to the one, down the hill. So I tried to keep in mind how it was going for them, but keeping in mind how it would ride for my horse.”

After her victory gallop, Hayley Waters looked at the $75,000 check in her hands and was overcome by emotion. Dana Waters stood beside her 19-year-old daughter smiling ear to ear, adding, “To have this kind of class for the juniors and amateurs is amazing. They work so hard and give up a lot of things in their young lives to do this so to have a class like this and get some recognition and a nice pay check is really nice.”

Pre-green horses had their time to shine during the 2015 HITS Championship in the debut of the Stal Hendrix Pre-Green Futurity. The class, which offered young hunters the spotlight during the richest weekend in show jumping, guaranteed a $25,000 purse plus all add-backs from nominated horses, for a total of $50,200. Having shown at HITS Ocala, HITS Culpeper and HITS Saugerties throughout the year, it was only fitting that Tracy Fenney, of Flower Mound, Texas, and MTM Fashion, owned by MTM Farm, left the ring with the winning check in tow.

The three-day, four-round competition tested the young horses over fences and with handy-type elements. The top 25 riders moved on to round three, and it was no surprise Fenney was a standout. Taking home the highest round three score of 88, Fenney guaranteed herself a spot in the final round alongside the other top three riders.

First to reenter the ring in the final round was Cassandra Kahle and Corinna RS, owned by Redfield Farm. Keeping cool under pressure they cruised to a score of 85, which added to their round three score of 86 resulted in a total of 171. Patricia Griffith, who scored an 87 in round three, was next in the order and piloted Lexi Maounis’ Fetching to a score of 80, for a total of 167 to finish just behind Kahle.

Saugerties’ sweetheart Heather Caristo-Williams was third to test the field of play and aiming for a win, she rode Sunset Hill, owned by Jacqueline Thorne, to an impressive score of 89, which added to her previous round score of 87.5, gave her a total of 176.5 for the lead.

Fenney was the final ride of the afternoon and she was in it to win it. Navigating her young mount, who has only been showing since May, she rode to a round high score of 90, for a total of 178 and the blue ribbon.

“Throughout the rounds, we went from the Outside Course to the Main Hunter Ring, so it was quite nice,” said Fenney. “The class was later in the evening which was a little tough for the pre-green horses. With the young ones, you never know what they are going to do but you try to give as solid of a performance as you can.”

Fenney, who noted the significance of the Pre-Green class, continued, “To be able to have a pre-green horse these days and keep him, whereas before you had to sell them because there was no way to have them pay for themselves, makes this a great class for us. Now we have the opportunity to make some prize money with them.”