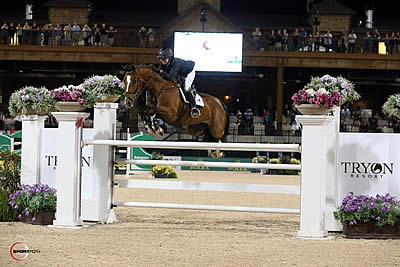 Mill Spring, NC – May 30, 2017 – Hayley Waters of Sparr, FL and Uppie De Lis sped to the top of the class in the $50,000 Tryon Resort Grand Prix on Saturday, May 27, after crossing through the timers in 36.594 seconds in the jump-off round. Manuel Torres of Leesburg, VA and Christofolini H rode to second place with a time of 38.508 seconds, while Nicole Shahinian-Simpson of Wellington, FL and Cassi earned third place after stopping the clock in 38.779 seconds.

Waters, one of the youngest riders competing in the class, made a quick and efficient effort around the track designed by Michele Ismalen, which featured 23 entries. Four combinations returned to test their efforts against the short course, which saw three of the combinations complete the evening with a double clear effort in both rounds of competition.

Uppie De Lis, a 2001 Dutch Riding Horse gelding, owned by Mr. & Mrs. Chuck Waters, has a breadth of experience at the international level with several top riders, but has found his stride with Waters piloting from the irons. The pair has already accomplished several career defining feats in 2017, and Waters is looking forward to the rest of their season together.

“I’m really excited. He’s such a good horse. I’ve only had him since the beginning of the Ocala circuit this past winter,” she explained. “I love how dependable he is. He’s a great partner and a great teammate. He fights for you at the jumps and he’s been such a good teacher for me.”

The pair will look to contest both national and international competition this season, and Waters feels that their relationship and partnership will only get stronger as they continue to solidifying their communication with each other. While winning the class came as an unexpected victory for Waters, she noted that she wanted to keep her plan simple by deconstructing each fence and riding the course jump by jump.

“I jumped my first big class on him this past winter and he’s given me a great feeling. I was just trying to go one jump at a time tonight. There were a few things that changed when we were in the ring from my original plan, but he took it all in stride. I just wanted to keep everything organized.”

The pair will head north to contest a few other major competitions before re-evaluating the rest of their summer and fall schedule. She explained, “He is so scopey and has such a good heart. I want to thank my team, my parents, my family, for their help and support. I feel like we’re at such a good point and I think that there are only good things to come from here.”

Waters also took top honors in the $25,000 Suncast® Commercial Welcome Stake aboard Quirnt, owned by Mr. & Mrs. Chuck Waters, who completed the jump-off track in 34.999 seconds. Andrea Torres Guerreiro of Waterford, VA and Emilia, owned by Santa Catalina Farm, rode to second place with a time of 35.228 seconds, ahead of Jorge Andres Barrera, who competes for the nation of Colombia, and his own Cartouche, who rounded out the top three with a time of 39.166 seconds.

Waters of Sparr, FL and her longtime mount Quirnt dashed through the jump-off track, finishing just a hair ahead of Guerreiro to take top honors. Eleven combinations moved forward to contest the jump-off track, while only the top four competitors finished with a double clear effort around both courses. Waters also finished in sixth place with Uppie De Lis, who would move on to win the $50,000 Tryon Resort Grand Prix later in the week.

The $8,000 High Junior/Amateur Owner Classic was championed by Hayley Waters of Sparr, FL and Idalie Van Doperheide, owned Mr. and Mrs. Chuck Waters, with a jump-off time of 39.674 seconds. Second place honors were awarded to Thaisa Erwin of Middleburg, VA and Evita, owned by Hollberg Equestrian, with a jump-off time of 44.936 seconds. Andrea Torres Guerreiro of Waterford, VA and Evermine, owned by Santa Catalina Farm, finished in third place with eight faults and a time of 76.193 seconds.

The $5,000 Ariat® Medium Junior/Amateur Owner Classic was dominated by Hannah Newton of Houston, TX aboard her own Athena with a jump-off time of 37.301 seconds. Carly Dvorkin of Parkland, FL took home second place honors aboard Acetto Du Lys, owned by Pine Hollow Farm, in 39.484 seconds. Dvorkin also claimed the third place position, this time aboard Carlotta 168, also owned by Pine Hollow Farm, with a time of 41.855 seconds.

Ty Simpson of Royal Palm Beach, FL and Indiana 127, owned by Hollow Creek Farm, won the $3,000 Low Junior/Amateur Classic with a jump-off time of 36.703 seconds. Lauren Palko of Roswell, GA and her own Copy Cat collected second place with a time of 36.983 seconds, while Christi Israel of Ocala, FL and her own mount, Carry Me Over Z, took home third place honors with a time of 38.956 seconds.

The $2,500 USHJA National Pony Hunter Derby saw Morgan Ashby of Lincolnton, NC and her own Beatrix Potter take top honors in the class. Second place was awarded to Mary Hunter Millet of Hillsborough, NC aboard her own Just 4 Me, while by Alexandra Ryden of Cary, NC was presented with third place aboard her own Celtics Creek Friar Tuck.

The Adult Amateur Hunter Division was championed by Betty Oare of Warrenton, VA and Zazu, owned by EMO Stables, and the reserve championship was awarded to Tricia Barr of Wellington, FL and Big Girls Don’t Cry, owned by Rodney Bross.

Betty Oare of Warrenton, VA also took home top honors in the Amateur-Owner Hunter 3’3″ Division aboard Belle Glos, owned by EMO Stables, while reserve honors were presented to Chrissie Catto of St. Augustine, FL and her own Intuition.

Missy Yoder of Palm Beach Gardens, FL and her own Too Much Fun took home the tricolor in the Amateur-Owner Hunter 3’6″ Division, followed by Julia Curtis of Villa Rica, GA and her own Ezra.

Addison Benio of Marietta, GA and her own Umako De Virginia earned top honors for the week in the Animobile Mobile Vet Children’s Hunter Horse Division, and Wiley Johannesmeyer of Ponte Vedra Beach, FL and her mount Quincy took home the reserve rosette.

The Children’s Hunter Pony Division was championed by Raine Whitman of Monroe, NY aboard her own Rollingwoods Give’ Em L and the reserve ribbon was presented to Frankie Nicklaus of Duluth, GA aboard Nicely Dun, owned by Patchwork Farm LLC.

Holly Shepherd of Grand Bay, AL and Longstreet owned by Barbara Risius, took home top honors throughout a week of competition in the High Performance Conformation Hunter 3’9″ Division. Reserve honors were again awarded to Shepherd, this time aboard Triompf, owned by Loretta Patterson.