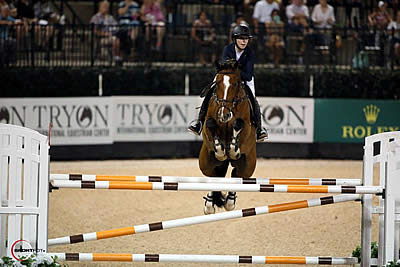 The $65,000 Tryon Resort Grand Prix saw 24 entries, twelve of which returned for the jump-off track set by Dean Rhienheimer. Waters explained that when she walked the course with her trainer, Daniel Damen, they tried to focus on each of her three mounts as individuals. Waters placed in the money with two of her three mounts, earning 12th place honors aboard Qurint.

“Everything [about the course] rode how it walked,” she said. She elaborated that while some elements were challenging for her other mounts, “Uppie”, a 2001 NRPS gelding owned by Chuck Waters, is a veteran jumper and completed the course with ease.

“Uppie’s sixteen – he knows what’s going on. With one of my horses, I knocked a rail on the skinny down because we kind of got going around the turn to it. I was a little close on time with the other horse, but I thought it was a good course. I was surprised by how many went clear tonight,” she added.

Waters has been teamed up with Uppie De Lis since this past winter, which she spent in Ocala, FL. “I bought him from Andy Kocher, who has had a lot of success with him,” she explained. “It’s been really nice to have this horse to learn to jump bigger tracks.”

Although her long-term plans for Uppie De Lis are still unclear, Waters explained that they will travel to Saugerties, NY in the near future and she will continue to learn from him in each competition opportunity they get.

“He’s been a great mount for me. I’ve already l learned so much from him in just a short period of time. I’m really looking forward to where our partnership goes. We’ve had a great season so far and I’m proud of the way he’s gone,” she concluded.

Alexis Trosch of Wellington, FL took top honors in the $35,000 Sunday Jumper Classic, guiding his own Opaline Z around the short course in 40.727 seconds. Emanuel Andrade took both second and third place honors aboard his own U and Gran Mamut, owned by Alder International Management Company, with jump-off times of 39.052 and 39.226 seconds, respectively. Andrade and Trosch were the only riders to guide four entries to the short course out of sixteen trips.

Todd Minikus of Loxahatchee, FL guided Luigi, owned by Caron Stucky, to a top place finish in the $35,000 Suncast® Commercial Welcome Stake with a blazing jump-off time of 34.584 seconds. Alexis Trosch of Wellington, FL took second place aboard his own Opaline Z with a short course time of 36.695 seconds, while Darragh Kerins of Wellington, FL and his own Penelope Cruz took third place, finishing the jump off in 37.908 seconds. The class saw twenty-three entries, four of which came back for the short course set by Dean Rheinheimer.

Megan Wexler of Ocala, FL and Amara, owned by Catherine Merrill, rode to victory in the $10,000 USHJA National Hunter Derby after collecting a total two round score of 172. Erika Jakobson of Boca Raton, FL and Nobel Laureate, owned by Barn Rat, LLC, finished in second place with a total score of 167, while Robert Stucky of Waxhaw, NC guided The Girl from Ipanema, owned by Caron Stucky, to third place with a score of 164.

The Pre-Adult Hunter 2’6″ Division saw Madison McCreery of Madison, MS and her own Secret take championship honors in the division ahead of Catherine Merrill of Reddick, FL and her own Amara, who collected reserve champion.

Madison McCreery also took top honors in the USHJA Hunter 2’6″ Division aboard Secret, ahead of Steve Heinecke of Charlotte, NC and Hercules VD Vromboutshoeve, owned by the Freedom Group.

In the Children’s Hunter Pony Division, Anna Marie Mayes of Memphis, TN and Half Moon Bay, owned by Heather Hornor, finished on top ahead of Pilar Ojeda of Waxhaw, NC and her own Tide Creek Allegra.