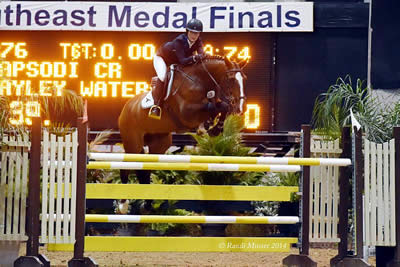 Hayley Waters and Rapsodi CR jump to the win in the $25,000 Jacksonville Grand Prix. Photo by Randi Muster.

Jacksonville, FL – September 20, 2014 – The second day of the 2014 Southeast Medal Finals featured the $25,000 Jacksonville Grand Prix. The impressive course, designed by Philip J. DeVita, posed no problems for Haley Waters as she sailed to nab the first place ribbon.

The first round included 12 obstacles with three double combinations over which riders had to maneuver. The flowing and straightforward course was set to be ridden comfortably, without a great deal of adjustment.

“I like a lot of bending lines, always keeping the next jump in front of you and creating a really nice flow,” said DeVita. “The reason for three doubles and no use of a triple comes from my horse training days. I feel I can train a horse to do more with three doubles than I can with a triple. I give the horse three different looks to three different combinations and build confidence. Triple combinations often become such a factor in a course design that often times the horse leaves the ring discouraged rather than encouraged. I feel the job of a course designer is to be a teacher and to help bring horses along while building confidence.”

Only three riders had clear rounds and progressed to the jump-off round including Kaley Tomeu of Wellington, Florida, who won the Southeast Medal Finals Welcome Stake on Thursday. Aboard Fidalgo Van Het Leliehof, Tomeu was the first rider to try the shortened jump-off course. Tomeu and her horse tripped after the double at 11A/B combination and incurred 4 faults, finishing with a time of 37.350 seconds. Next in the ring, Diego Vivero on Bandurria Hulmen finished with four faults and a time of 35.887.

Last to return was Hayley Waters with Rapsodi CR. The pair finished in 41.080, the slowest time, yet a clear round, capturing first place.

“He [Rapsodi CR] was great. I just got him a couple months ago from Europe and we got along right away,” explained Waters. “He’s experienced so it’s nice to have one to do the bigger classes who already knows what’s going on and is super careful which was nice for tonight. Going into the jump off, I knew I wanted to go slow enough to go clear. He was so good; I’m so excited.”

After her victory in the $25,000 Grand Prix, Waters hopes to continue her winning streak as she competes with her equitation horse in the ASPCA/NHSAA Alfred B. Maclay Region 3 Championships on Sunday. Look for Waters and Rapsodi CR in the Junior Jumpers in the upcoming season.

The Southeast Medal Finals will continue at the Jacksonville Equestrian Center on Saturday with the new Southeast Children’s/Adult Medal 2’6″ Finals kicking off in the morning, then the featured class of the day is the Phelps Media Group Junior Medal.

On Sunday the 2014 Southeast Medal Finals will live stream the ASPCA/NHSAA Alfred B. Maclay Region 3 Championships on the web. Join us live from the Jacksonville Equestrian Center on September 21, 2014 beginning at 8 a.m. Go to www.southeastmedalfinals.com for more information.

WHAT: The Southeast Medal Finals is an indoor and outdoor hunter, jumper and equitation horse show attracting the top riders.