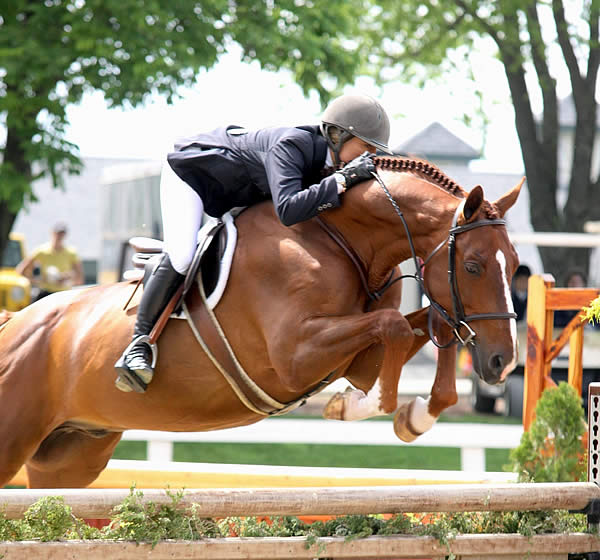 Lexington, KY – May 18, 2013 – Havens Schatt and Just Fred were just about flawless in tonight’s $5,000 Hallway Feeds USHJA National Hunter Derby. Schatt and Just Fred, owned by R. Bruce Duchossois of Aiken, SC, claimed the victory in what is one of the Kentucky Spring Classic’s most highlighted hunter events. The class, held today in the Stonelea Ring at the Kentucky Horse Park, is the second in the seven-part Hallway Feeds Series in which top riders from across the country vie for their share of the $15,000 Leading Rider Awards.

Tonight’s ten obstacle first round course set by Bobby Murphy featured a number of bending lines and rollbacks all set at 3′ with four 3’6″ option fences. If cleared successfully, the higher options were each worth an additional point added to each of the judges’ scores. From the opening field of 32 horse and rider pairs, the top 12 scoring combinations made the cutoff to come back for the handy round course, also designed by Murphy. The handy course featured nine obstacles, many of which were built to imitate the fences a rider would face on the hunt field. It presented riders with even more tight turns and rollbacks and different options to showcase their horses’ handiness.

“I thought the courses were great. The handy course really made you think, and it really made you go to all angles of the ring to see what was possible and what wasn’t,” Schatt commented. “There were so many different ways to ride it.”

Kelley Farmer returned to the handy round in the third place position with a first round score of 90 aboard Red Sky, owned by Dr. Kenneth and Selma Garber and Larry Glefke of Keswick, VA. Farmer and Red Sky took all of the higher options over the second course to earn a handy round score of 87, for a grand total of 177 over both courses, which would end up cementing their spot in third place for the night.

Farmer’s high score in the first was overtaken by Schatt and Just Fred, who returned as the second to last to go with a first round score of 91. The pair skillfully maneuvered the handy course to earn a base score of 84, plus four additional points for taking each of the higher options for a total second round score of 88. That score combined with their first round score of 91 moved them into the first place position with an overall point tally of 179.

Farmer was back again as the final rider to return, this time with Skorekeeper, owned by Larry Glefke and Quail Run Partnership of Keswick, VA. The seven-year-old horse earned a total first round score of 94 to shoot him to the top of the leader board going back in to the final round, but a slight chip to the third fence of the handy course would leave him with a second round score of 84. That 84 left Farmer and Skorekeeper with a final point total of 178, just one point behind Schatt and Just Fred for the second place award.

“The camaraderie in these classes is really nice. It’s competitive, but it doesn’t seem so high stress,” Schatt said following the class. “The classes are great to get young horses in the ring and get them going and get them used to the people watching, the crowds and the banners. I think it’s an awesome series.”

“We bought him last year in Florida, and he was actually doing the jumpers,” Schatt said of Just Fred. “We thought that the derby would be really fun out there in the big ring [the Rolex Stadium] last weekend, and he was awesome. We were fourth going back into the handy round, but I walked the trot jump. It wasn’t Fred’s fault. So we planned to do it again this week and see how he’s coming along.”

Schatt continued, “Fred can really jump, so we’ll see how he comes along, but I would hope come June I could do the bigger derbies. I think he’d be really fun to do in those.”

The Hallway Feeds Hunter Derby Series returns at the Kentucky Summer Horse Show, with the third class in the series being held July 27.

Hallway Feeds’ close proximity to the Kentucky Horse Park provides the opportunity to utilize the freshest feed, manufactured with time-honored commitments to high standards of quality and the latest scientific advances. Combining a premium nutrition package with a professional level of dedication in horsemen and women provides equine athletes with the Formula for Success.

Hunter competition continues tomorrow at the Kentucky Horse Park as the Kentucky Spring Classic comes to a close with the awarding of the Small Junior Hunter and Children’s Hunter championships.