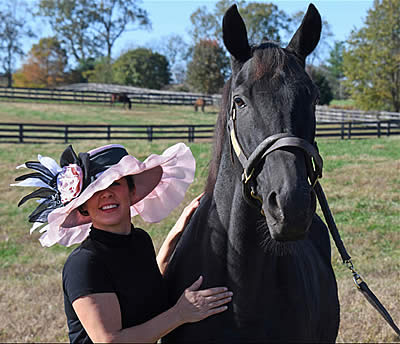 GEORGETOWN, KY – APRIL 3, 2020 –  The annual “Hats Off to the Horses: The Road to the Derby” online fashion auction continues this week with a new Derby-style chapeau going on the virtual block to raise money for Old Friends, the Thoroughbred Retirement Facility in Georgetown, KY.

This is the 11th consecutive year that Old Friends has joined with acclaimed milliner Sally Faith Steinmann of the Massachusetts-based Maggie Mae Designs® to auction off four handcrafted Derby hats between January and April, each inspired by one of the non-profit organization’s 200-plus retired racehorses. To date this online fundraiser has garnered nearly $40,000 for Old Friends.

This new hat was inspired by graded stakes winner Slim Shadey, and it is showcased here by equine artist Dagmar Galleithner-Steiner.

The hat will be up for bid for 10 days only from 8 pm (EST) April 1st through 8 pm (EST) on April 11th. Interested bidders can go to the Old Friends website at www.oldfriendsequine.org and follow the link, or CLICK HERE to visit our eBay page.

To read more and to view additional images of the hat, CLICK HERE.

A two-time graded-stakes winner, Slim Shadey — by 2001 Breeders’ Cup Mile winner Val Royal (FR) out of the Chief’s Crown mare Vino Veritas — was bred in Great Britain by Phil Cunningham and spent two seasons racing throughout England and Ireland. He made his U.S. debut for Cunningham and trainer Simon Callaghan in 2012 at Santa Anita, kicking off what was to become his banner season.

In February of 2012 Slim captured his first graded stakes, the Grade 2 San Marco at Santa Anita (a race he would capture again in 2013). Then, in September, Slim took the top spot in the Grade 2 John Henry Turf Championship, which served as a stepping stone to a run in the Grade 1 Breeders’ Cup Turf where he finished 8th (a few lengths behind the winner, Old Friends retiree Little Mike). By 2014, the now 6-year-old Slim began a series of claims. In 2018 Slim was claimed by owner Michael Hui for trainer Mike Maker.  After a series of unsuccessful starts for his new connections, the time finally came for Slim to hang up his racing plates.

Since Slim raced for several different stables Steinmann used a combination of his pink, black, and white silks for the trimmings of this stunning Derby hat.

A large foundation was created using a base layer of soft pink dupioni silk. The brim was then trimmed with a single layer of pink silk organza ruffle, which allows the light to pass through the sheer fabric. A fancy black braiding was top stitched where the silk layer meets the brim edge. To further showcase racing silk colors, a large rose curl, created out of alternating layers of pink dupioni silk and white silk organza, adorns the front of the hat.

For the final touches, a medley of black and white silk organza “feathers” were added, a black satin sash encircles the crown, and a black pebble button edged in gold adorns the sash in the back.

The hat is stunning from every angle and measures approximately 21 inches end to end. The lining for the “Slim Shadey” was done is a soft pink satin to coordinate with the floral trim.

As a physical remembrance, several strands of Slim’s tail hair have been braided and woven into the trim.

Our thanks go out to artist Dagmar Steiner for helping with this year’s “Hats Off to the Horses” and also to Old Friends volunteer and photographer Laura Battles for her stunning images.

Bidding on the “Slim Shadey is open now.

Maggie Mae Designs® Custom Millinery offers magnificent hats for all occasions, from glamorous racing events such as the Kentucky Derby and the Royal Ascot to stunning bridal wear and handsome cocktail fashions. Every hat is carefully handcrafted by milliner Sally Faith Steinmann from her home base in South Harwich, MA. Salons of her fashions can be seen on her website at www.maggiemaedesigns.com.