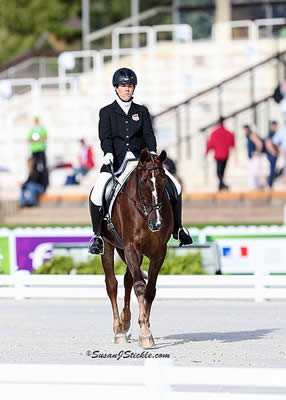 CAEN, NORMANDY, August 29, 2014 – To be selected to represent one’s country at a world championships is an honor that few riders ever experience. To not only compete but to perform well enough to advance through the rounds of competition to qualify for the finals is a rare achievement, indeed.

For Trunnell, 29, of Rowlett, Tex., today’s freestyle aboard the nineteen-year-old Dutch Warmblood mare Nice Touch was a high note in several ways. For one, this is Trunnell’s first time on a U.S. equestrian team. For another, it was the ride of a lifetime aboard the horse she’s been paired with since Trunnell was 13. And to top it off, this was Nice Touch’s swan song.

“It was fantastic. She is a good girl,” a beaming Trunnell said afterward. “This was her grand finale.”

Trunnell was proud of her freestyle routine, appropriately set to George Gershwin’s “An American in Paris” and to music from the musical Gigi, including “Thank Heaven for Little Girls.” The highlight, she said, was Nice Touch’s relaxed free walk, which helped the pair earn a score of 62.400 percent for a seventh-place finish.

Schedules are tight for the para-equestrian dressage athletes: Trunnell returns home tomorrow, Saturday, which unfortunately leaves her no time for sightseeing in France. But “I’ll be back,” she said.

The 2014 U.S. WEG para-dressage team veteran, Rebecca Hart, 30, of Unionville, Penn., found herself in the position of showing her new mount, Schroeter’s Romani, the ropes of international competition. The twelve-year-old Dutch Warmblood mare “was definitely enthusiastic” in her Grade II Freestyle, Hart said with a laugh, referring to occasional tension and loss of focus that left the 2014 United States Equestrian Federation Para-Equestrian Dressage national champions with a score of 65.400 percent and seventh place.

“As we move along, I’m hoping for more power and relaxation,” Hart said afterward. “The enthusiasm is appreciated, but maybe just a little bit more controlled enthusiasm.”

The WEG was the debut performance of this freestyle, said Hart. Freestyle choreographer Marlene Whitaker helped Hart put the routine together – but according to the rider, it was Schroeter’s Romani who approved the music selection.

“She loves this music; she actually picked this music herself,” Hart said. “It’s ‘The Journey Begins,’ which is fairly fitting, since this is the beginning of our journey together.” The melody is the anthem from the 1996 Atlanta Olympics, she said, and “We used that with some other pieces as well that we mixed together.”

Looking to the future, Hart added: “This was our original choreography, but if we want to change out leg-yields for half-passes or increase the difficulty later on, we can.”

And Hart may be doing just that as she focuses on her next big goal: the 2016 Paralympic Games in Rio de Janeiro. First things first, however: “Between now and then, we’re going to get her out and about quite a bit so she gets used to different venues and different atmospheres. We can work on building our trust together so she comes to me and looks to me for support and guidance instead of being distracted, and so we have more of the harmonious relationship that you’re looking for in any dressage horse and rider.”

After Hart returns home to Pennsylvania, her mare will get a bit of a break; then the rider is “hoping to do the winter season in Florida.” Then “the para-dressage [competitors and supporters] are looking to do a European tour in the spring. We feel that European exposure is so important, not only for us as individuals but for the country as a whole so our team can get out there and be seen.”

With the 2014 WEG, the young U.S. para-equestrian dressage team has taken a major step toward the medal podium on the international stage. It will be exciting to follow this talented group of horses and riders as they proceed on their journey.

Support the Team and its future to the 2016 Paralympics in Rio with the USET Foundation’s Jonathan Wentz Memorial Challenge: http://uspea.org/the-jonathan-wentz-memorial-challenge/.

Learn more about the U.S. Para-Equestrian Dressage discipline or give a tax-deductible donation to support the development of the sport with the USPEA 501(c)(3)t: www.USPEA.org.