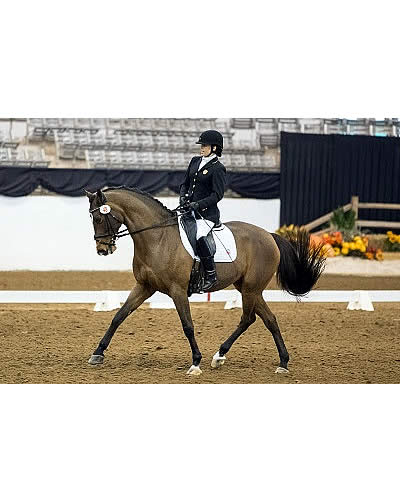 Katy, Texas – It could not have gone more perfect for Rebecca Hart. After posting spectacular scores in the Team Test and Individual Test, Hart wowed the judges in the Freestyle to earn her seventh USEF Para-Equestrian Dressage National Championship today. Hart topped the CPEDI3* Championship High Performance division with an overall score of 73.333%. Kate Shoemaker edged out the field in the CPEDI1* Championship National division to win the National title on an overall score of 71.435%, also due to a fascinating Freestyle. In addition to her title, Shoemaker was awarded the Lloyd Landkamer Memorial Sportsmanship Award for exemplifying good sportsmanship throughout the competition.

Hart (Unionville, Pa.) and her own Schroeter’s Romani started the competition with a stellar Team Test. The Grade II athlete and the 2002 Danish Warmblood mare remained focused despite a storm rolling in to score a 73.118%. They moved into Saturday’s Individual Test on a high and followed it up with a magnificent showing to score a 74.314%. Sitting comfortably on top of the standings, the combination put together a flashy performance to score a 77.650% in the Freestyle. Hart changed the music around to match Schroeter Romani’s tempo, and it paid off.

“It was a good week and it feels amazing. This was a good way to give back to everyone who has been on this adventure with Romani and me. I would not be doing this without them. Without the support and guidance of Margaret Duprey and my trainer Todd Flettrich we wouldn’t be as solid of a team. We’re going to take everything we learned here and prepare for the CPEDI competitions in January,” said Hart.

It was a close competition for the Reserve National Title. However, an amazing Freestyle performance allowed Grade III athlete Angela Pevy (Avon, Conn.) and Ozzy Cooper, Rebecca Reno’s 2006 Trakehner gelding, to solidify the honor with a score of 74.950% and an overall score of 71.278%. Pevy started the competition with a wonderful Team Test for a score of 70.866%. They continued with a consistent performance during the Individual Test to score a 69.854%. Grade Ia athlete Roxanne Trunnell (Rowlett, Texas) also had a wonderful Freestyle for a score of 70.850%. She and Royal Dancer, Julia Handt’s 2005 Westphalian gelding, finished on an overall score of 69.352% for third place.

Shoemaker (Edmond, Okla.) did not know what to expect going into the Freestyle. This was her first one with Solitaer 40. No one would have known as they performed like seasoned veterans scoring a 74.700%. The Grade III athlete and her own 2007 Hanoverian gelding had an outstanding competition, overall. Each day Shoemaker asked her mount to give a little more, and he delivered. They began the competition with a solid Team Test for a score of 70.237%. They posted another laudable score in the Individual Test for a score of 71.122%.

“This was like a dream come true. We are going to use the feedback from the judges and work to improve especially on bringing more power and brilliance in the movements, while maintaining accuracy. There were dozens of people who came together to make this championship happen; I could not have done this without them,” said Shoemaker.

Kelly Boccia (Phoenix, Ariz.) maintained her lead after the Freestyle to be named the Reserve Champion with an overall score of 68.556%. She and her own Donauwalzer CSF had a terrific performance to score a 70.350%. The combination found themselves barely in third place after the Team Test with a score of 67.471%. They moved into second place after having a respectable Individual Test for a score of 68.743%. Shoemaker finished in third place, overall, on a score of 67.791%, with her own Dachstein, a 2008 Dutch Warmblood gelding.