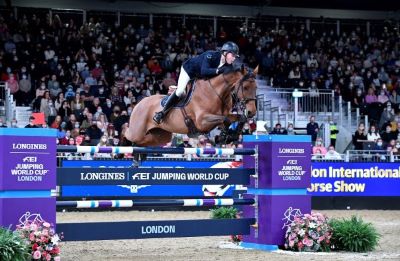 Ireland’s Michael Duffy was the first to produce a clear over the shortened course, which featured nine jumping efforts, setting a time to beat of 39.38 seconds. Norway’s Geir Gulliksen put in a brilliant effort to take the lead; however, it was short lived, as he was followed into the arena by the legendary John Whitaker, who went into pole position at the halfway point.

Former World No. 1, Harrie Smolders, survived a tricky moment at the first, before upping the ante to provide a new target to beat of 36.77. Great Britain’s Olympic champion, Ben Maher, put in a valiant effort but could not match the pace of Smolders, finishing in eventual fifth.

With three to go, Great Britain’s Harry Charles, full of confidence following a win earlier in the week, took over the lead to the delight of the sell-out crowd, shaving 0.86 seconds off Smolders’ time. The 22-year-old had a nail-biting wait for the final two, which included the in-form Martin Fuchs, but his round aboard the 11-year-old mare, Stardust, proved unbeatable, giving Charles the victory exactly 20 years after his father won the same competition.

An emotional Charles said: “It’s the best feeling. I’ve been coming here for years; this is one that I, and everyone, wants to win. I can’t really tell you how it feels. It’s my career highlight. We are thrilled with the horse; the whole team has made an incredible effect to get us to this point; it is the best feeling ever. The atmosphere was incredible; to have all the people here behind me was incredible. I don’t normally throw my hand up like that but it all just got to me, the crowd and everything. It’s mad – the new place, the big crowd. I think the world of my horse; she’s amazing and I think she could be everything. She is so inexperienced at this level, but she has such a quick turn of foot – she has everything I want from in a horse. Where she came from at the start of the year to now is a dream come true!”

Runner-up, Harrie Smolders, added: “It’s always a pleasure to come back to London; it’s an amazing atmosphere here. We saw spectacular sport today and having such a brilliant audience makes our achievements greater. I don’t know what happened at the first. I think I had the right distance, but the fence was in the wrong place! I didn’t have the smoothest start, but I am still very pleased and I can’t complain about the outcome. Congratulations to Harry – I think it’s just the start of Harry Charles with the World Cup here; we are going to see a lot more of him in the future. Well done to John too; there’s a little bit of difference in age, but he’s still at the top level and at the top of his game.”

Third-placed Whitaker, who first competed at The London International Horse Show in 1972, said: “Unick du Francport jumped great; the course went to plan, how I decided to ride it. I was a little bit careful at the green double which caused a few problems, but I think I just need more experience to beat these guys! This show is a level above all others; this is the class to win, especially for us British riders, and for one tiny second, I thought I might do it! The new facilities here are very, very good: impossible to fault.”