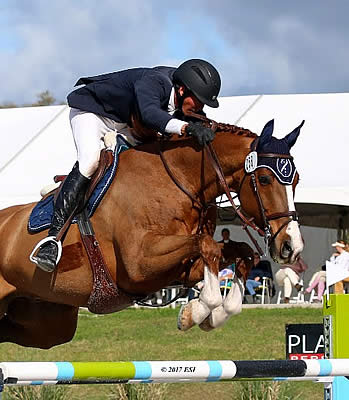 Ocala, FL (February 25, 2017): After an exciting finish to the FEI Nations Cup CSI4* week at HITS Ocala, FEI competition continued at HITS Post Time Farm. Riders and horses from the US, Canada and abroad met in the Horse Capital of the World for a shot at blue ribbon status. Harold Chopping of Southern Pines, North Carolina grabbed the win in the $25,000 FEI SmartPak Grand Prix.

Fifty-one challengers tested the course designed by Manuel Esparza of Mexico and nineteen would advance with first-round clears to contest the abbreviated course in the jump-off. Twelve produced clean jump-off rounds, leaving it all down to the quickest time to bring home the victory.

Chopping, who originally hails from Canada, piloted Basje, owned by Kendra Bullington, through the jump-off, laying down a blazing-fast ride in 38.20 to eventually take home the win.

Brandie Holloway ultimately garnered second place in the thrilling class aboard Lucky Strike, owned by Hays Investment Corp. Their final time of 39.06 after a fault-free round in the jump-off gave them the red-ribbon slot on the leaderboard.

Coming in just behind Brandie Holloway was Germany’s Andre Thieme riding Conthendrix. Just fractions of a second divided Thieme’s time from Holloway, a 39.34, settling them third in the ribbons.

Brandie’s daughter, Hunter Holloway, would also capture a seat in the top five. Hunter won the $41,200 FEI Thursday Prix at HITS Ocala with VDL Bravo S, owned by Hays Investment Corp, and the pair showed they are still in top form. They earned fifth place with their clean round in 41.13.