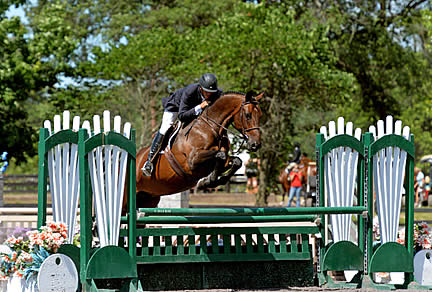 ©ESI Photography. Harold Chopping and Caramo jump their way to a win in the $5,000 Devoucoux Hunter Prix.

Amy Zettler and Glad Rags are two-for-two in Virginia

Chopping, of Southern Pines, North Carolina led the way to victory in the hunter ring, piloting the 16.3, Danish-bred bay gelding Caramo, owned by Caroline Russell Howe, to a win in the $5,000 Devoucoux Hunter Prix on Saturday.

Chopping and Caramo bested a field of 17 over a course designed by Rian Beals of Saugerties, New York. The pair led the first round with a score of 87 and returned in the second round to post an 85 for a total score of 172.

“This was his [Caramo] first time in the ring this week, but he is one of the most consistent, reliable horses I have ridden,” said Chopping, who has been riding Caramo for two years. “He’s just a great guy to ride. He can walk in any ring for the first time and jump fair.”

Nipping at the heels of Chopping and Caramo in the second round, Paul Mathews of Somerset, Virginia and Terry Morrison’s Carino combined a high score of 89 with a first-round score of 79.5 for a total of 168.5, to finish in second.

Third went to Katherine Newman of Wellington, Florida and Mimi Abel Smith’s Lofty. They rode to a pair of 84s for a final score of 168. Ian Silitch of Ocala, Florida rode Party Girl, also owned by Mimi Abel Smith, to fourth with a total score of 164. Silitch finished the first round one point behind Chopping with an 86 and pocketed a 78 in the second round. Denice Perry of The Plains, Virginia and Mr. & Mrs. Ernest M. Oare’s Tryonite rounded out the top five, posting scores of 81 and 79 for a final score of 160.

Before this weekend’s blue, Chopping and Caramo sat comfortably in the eighth spot in the preliminary Diamond Mills Hunter Prix Final Rider Rankings. As qualifying for HITS Championship weekend and the Diamond Mills $500,000 Hunter Prix Final kicks into high gear during the coming weeks, Chopping is confident that Caramo will make a respectable showing in the exciting year-end event.

”Some horses don’t do 3’3” well after being successful at 4’, but Caramo can come down and be great – he’s definitely headed for the final in September,” concluded Chopping.

The Aldie, Virginia rider and her 10-year-old gelding, whom she affectionately calls “Primo”, currently lead the preliminary HITS Hunter Prix Rider Rankings by a sizable margin and are eager to make another appearance in the HITS $250,000 Hunter Prix Final this fall. Zettler, who trains with Peter Foley and Dale Crittenberger at Woodhall Farm in Northern Virginia, placed second in the inaugural HITS Hunter Prix Final in Saugerties, New York last year during HITS Championship Weekend.

Zettler and Glad Rags earned the top score of 83 in the first round and bested herself with a score of 87 in the second for a final score of 170 and the win.

“This horse is just fantastic and today was no different,” said Zettler after the class. “I love showing in Culpeper since it is so close to home for me. Our priority while we are here this summer is to qualify for the HITS Hunter Prix Final again – I plan my whole year around that class.”

Riders in both the Devoucoux and HITS Hunter Prix with their sights set on qualifying for the Diamond Mills and HITS Hunter Prix Finals will have weekly opportunities to earn points as HITS Horse Shows continue in Culpeper, Virginia and return to Saugerties, New York July 17. Both finals will be highlighted during HITS Championship Weekend, September 4-8, in Saugerties. To stay current on all qualifying, visit HitsShows.com.