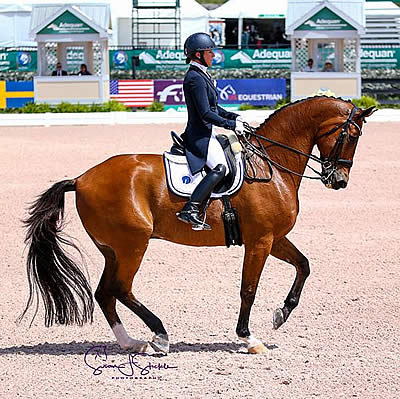 Wellington, FL – March 28, 2019 – Competition at the final week of the Adequan® Global Dressage Festival (AGDF) continued on Thursday, March 28. The afternoon featured the first two four-star classes of the 2019 season to qualify riders for competition on Friday, March 29.

Jessica Kozel (USA) and Denzello won the FEI Grand Prix CDI4* (for freestyle) presented by Douglas Elliman Real Estate. The pair rode to a personal best score of 69.239%. “I was really happy with the canter tour in general,” said Kozel of her ride on the 16-year-old Hanoverian gelding by DeNiro owned by Jeevraj Grewal. “I was happy with my changes. He can get a little hot in those, and I was afraid that those might go either way. He just kind of found himself, and that was my highlight.”

Kozel rehabbed Denzello over the last two years from what was thought to be a career-ending soft tissue injury. “I’ve known him for the last ten years, and I managed him as a groom for many, many years. I did my first Grand Prix ever on him in the national ring [last year] with the hope to work towards the international ring this season,” continued Kozel. “We’ve done that, and I am just really proud of him.”

“I thought it was a little surreal. I didn’t think it was for us,” said Kozel about her experience when she got the first place ribbon. “That was our best grand prix yet, and I was really happy with a 69.239%. When she walked up to me with the blue ribbon I was like, ‘Is that for me?’ Not that she would be joking, but I just would have never expected it in a million years. It was really an honor to not only have our best ride yet, but to be able to put it together in these circumstances and at a show of this caliber.”