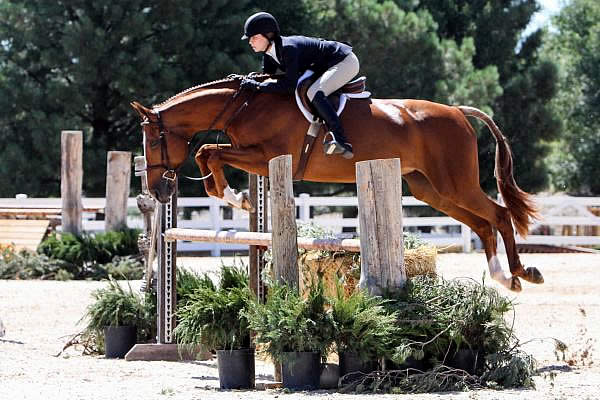 Parker, CO – July 18, 2013 – Hannah Holik is moving up the ranks in the jumpers and showing that she is capable of dominant performances in the hunter ring as well. She and Czech Mate LLC’s Dahlila notched two wins on Wednesday and placed well on Thursday to secure the championship in the 3’6″ Performance Working Hunters, with Ashley Keeler and Emma Willsky’s Simply Said taking the reserve.

“She was really good today,” Holik, 16, said of Dahlila. “I think the heat might have gotten to her a little bit. She felt like she had a little less energy, but she still jumped in great form and I can always count on her to bring all her efforts to the ring.”

Later in the day, Holik paired with her jumper, Cupido de Laubry, for a clear first round and a top 10 finish in the $15,000 McElvain Energy Welcome Stake. She said the switch from the hunters to the jumpers was made easier by Dahlila’s background as a jumper.

“It can be difficult sometimes to switch, but Dahlila can sometimes be ridden like a jumper – she gets a little strong once in a while,” Holik said. “That makes it easier for the transition between the rings.” She added that Cupido de Laubry, whom she calls Cupi, was “absolutely wonderful.”

“I was really excited about going clean,” she said. “My goal was to not get any time faults, because that’s been bugging me for a little while. This is the first time I’ve gotten to the jump-off with Cupi, and I was just excited that we had a smooth, clean round.”

Holik’s next target with Dahlila will be the ASPCA Regional Finals, and she plans to continue gaining experience and mileage with Cupi at the grand prix level. “I’ll maybe do Young Riders next year – now that we know him really well, I feel like I’m prepared,” she said. “And I just want to keep getting more experience.”

Riding is a family affair for Holik. Her mother, Renée, introduced her to the sport when she was young, and she has pursued it with dedication ever since. Renée rarely competes now, but she helps her daughter keep her horses fit while balancing a busy school schedule.

Holik, of Jackson Hole, WY, trains with Randy Henry. “We meet up with Randy at the horse shows,” Holik said. “She also sometimes comes to clinic for a few days.”

While Holik has ample talent and drive to succeed, she is not necessarily planning to make a career out of riding and training. She hopes to attend college and continue riding in the higher-level jumpers, and her ultimate goal is to become a vet. “I just want to continue to be a better rider,” Holik said. “I hope to be a vet so I can still be around the horses as much as possible.”

Summer in the Rockies has been an important show circuit for Holik. She rode in the grand prix last year and then rode Cupido de Laubry in their first grand prix together this year. “It’s been going great,” she said. “I absolutely love this show. It gives me the option to do all these different things with my horses. The courses are great, the jumps are beautiful – it’s just a nice show.”

Husband and wife team Freddie and Jodi Vazquez continued their successful run in the hunters. Both had strong results throughout the day. Freddie rode Cynthia Baffa’s Marneux to claim the win in the $1,000 Open Hunter Classic. He and Marneux also took the championship in the 3’3″ Performance Hunters over Amanda Hauser and her own Calido’s Son.

Freddie was happy with Marneux’s performance. “He was wonderful,” he said. “He was shockingly a little more up today than he was yesterday, but totally manageable. He just keeps getting better and better. He jumped beautiful and got the win in both classes and the classic – I couldn’t ask for more!”

Freddie knew Marneux had a good shot to win the Classic, and Marneux rewarded his confidence with an outstanding effort. “I don’t enter unless I think I can win,” he smiled. “He’s the only one I did in the Classic. After yesterday, I really thought he was spot on, and I thought he could step up and win the Classic today.”

Consistency was the ticket for the championship in the First Year Green/Second Year Green/High Performance Hunters. Haylie Jayne and Summer Place compiled an impressive record of two wins and three seconds to take the honors, while Laurie Jueneman and Rio’s Firefly finished in the top four in every class to earn the reserve.

Christen Tuxworth, the owner of Rio’s Firefly, said he lives at home with her, goes trail riding, and shows a few times a year. She lives in Black Forest and was evacuated during the fire in June, but fortunately her house was unharmed. She described Rio’s Firefly as a horse with a lot of personality.

Summer Place is owned by Pony Lane Farm, and Jayne enjoys having the opportunity to prepare him for Madeline Thatcher to ride. “I love showing him at 4 foot because he’s so scopey and so much fun,” Jayne said. “You can kind of drop the reins and gallop at the jump, which you can’t do with lot of hunters. He moves beautifully and has a beautiful jump. He’s very consistent and reliable.”

According to Jayne, Summer Place is devoted to his owner. “He loves Maddie, and she gets along amazingly with him,” she said. “He jumps better for her than for me! He knows who his person is and he loves her.”

Jayne said Thatcher has had great success with Summer Place in the past. “She got great ribbons at WEF (the FTI Winter Equestrian Festival) and really nice ribbons at Devon,” Jayne said. “We’re shooting for good ribbons at indoors, which is very possible – they did well last year.”

Thatcher plans to show him in the Large Junior Hunters at Summer in the Rockies VI before going on to compete at indoors in the fall. The Junior Hunter divisions begin Friday and run through Saturday in the Olson Family Hunter Arena, which will also host equitation classes such as the ASPCA Maclay.