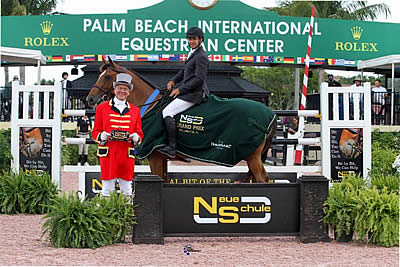 Wellington, FL – April 16, 2017 – Gustavo Prato of Wellington, FL and Carna Z took top honors in the $35,000 Neue Schule Bits Grand Prix at ESP Spring II hosted at Palm Beach International Equestrian Center (PBIEC), after tripping the jump-off timers in 33.596 seconds. Ailish Cunniffe of South Salem, NY and Baloucento 2 captured second place with a jump-off time of 34.44 seconds ahead of Emanuel Andrade of Wellington, FL and U, who narrowly missed second place and finished with a time of 34.769 seconds.

Prato and Carna Z, a 2005 Zangersheide mare (Crown Z x Gannus) owned by Equus Forte LLC, bested the class, which saw 19 combinations test the track designed by Ana Catalina Harris Cruz (MEX). Eight pairs advanced to the short course, while five finished with a double clear effort on the day. Prato and Carna Z went second in the jump-off and set a quick pace that was unbeatable.

“On the first course, I thought it was not huge, but technical, so we needed to first go clear,” he explained. “In the jump-off I had a few riders behind me that I knew were going to be really fast so I tried to go in and go as fast as I could and I got lucky.”

The duo has been working their way up through the levels over the course of the past year and 2017 was a break out season, as they continued to solidify their partnership.

“She’s been with me for a little bit over a year. She’s going to have a great year ahead of her. We’re heading to Kentucky and Tryon after the spring circuit here,” said Prato. “She has experienced a lot over the winter and I think in the spring and summer it’s going to be great and will only get better. I have high hopes for her.”

While going into the short course with a forward-thinking plan, Prato was aware that he would need to complete a round that would be difficult to beat for the combinations coming behind them. The mare, who has exceled at the larger heights this season with Prato guiding from the irons, is naturally fast, which Prato believes played a significant role in their win.

“I think she is just really fast all over the place. You can turn, you can leave the strides out. When it comes to speed it’s very easy for her. As long as you leave the jumps up, you know you’re going to be there time-wise,” he commented.

Prato and Carna Z earned a lot of “firsts” this season during the Winter Equestrian Festival (WEF) including their first FEI Nations’ Cup appearance and several successful outings during the popular “Saturday Night Lights” classes hosted each Saturday during the circuit.

“I thought that this winter season was great because when I got her a little bit over a year ago, she was only doing 1.30 and 1.35m. We started to improve together and even did the Nations’ Cup together. We also did a few Saturday Night classes together and I thought she did great,” he concluded.

Alex Granato of Wellington, FL and Carlchen W, a 2008 Mecklenburg gelding (Chacco-Blue x Continue) owned by Page Tredennick, captured a well-deserved win in the $25,000 TackNRider Grand Prix at ESP Spring II, besting a class of 41 entries. The pair finished a strong first round and proceeded to stop the jump-off timers in 37.211 seconds, six-tenths of a second faster than Emanuel Andrade of Wellington, FL and his own Dipssy. Kyle Dewar of Oconomowoc, WI and his own Clever van de Helle finished in third place.

Granato and Carlchen W have steadily gained experience at the national levels before contesting their first FEI competition this past season at the Winter Equestrian Festival (WEF).

“Carl has been a very fun horse to bring along. I’ve had the opportunity to develop him since he was five and now he’s nine,” said Granato. “He’s really started to come into his own this circuit.”

The pair dashed to a fast finish in a competitive class where Granato knew several quick pairs were to follow them in the eight-horse jump-off. Granato continued, “I’m trying to plan his year and pace myself but I’m very excited for his future. I think he has the talent to go far at the top levels of the sport.”

The class featured 40 entries to start off the week of competition at ESP Spring II and hosted a large jump-off with 17 combinations contesting the short course. Nine of the seventeen pairs finished with a double clear effort on the day, while Lambre secured his win over Meredith with just over a second separating the two.

The $5,000 Omega Alpha 1.35m Stake saw Emanuel Andrade of Wellington, FL and his own Tupac van de Rombautshoeve Z rise to the top of the competitive class, which saw 54 entries. The pair completed an efficient jump-off round in 34.202 seconds for the win ahead of Sharn Wordley of Citra, FL and Famoso D Ive Z, owned by Sky Group and Wordley, who completed their jump-off track in 34.601 seconds. Andrade followed his first place finish with a third place finish aboard his own Black Pearl, who stopped the jump-off timers in 35.019 seconds.

Joseph Aman of Wellington, FL and Gentle Tina, owned by Diamante Altelier, rode to victory in the $1,500 NAL Child/Adult Jumper Classic, stopping the jump-off timers in 40.113 seconds. Julia Strawbridge of West Grove, PA and her own C’est La Vie secured second place with a time of 40.892 seconds, while Elizabeth Lang of Lake Forest, IL and her own Aramon took third place after adding four faults to their jump-off time of 43.443 seconds.

Megan Davis of Cockeysville, MD and Deen, owned by Davis, rode to victory in the $2,500 Gold Coast Feed Low Junior/Amateur Owner Jumper Classic with a jump-off time of 38.478 seconds. Amanda Dollinger of Chicago, IL and Cupina Colada, owned by Dollinger, finished in second after stopping the jump-off timers in 40.407 seconds. Brooke Gunther of Chester Springs, PA and her own Wilford 2 secured third place with a time of 42.512 seconds.

Sarah Kerins of Wellington, FL and Penelope Cruz, owned by Darragh Kerins, finished in first place in the $2,500 Equiline High Junior/Amateur Owner Classic after finishing their second round in a time of 41.143 seconds. Brian Sweeney of Oyster Bay, NY and Calvados, owned by Sagamore Farms, took second place as the only other combination to advance to the jump-off round. The pair finished in 44.283 seconds. Dagny Mactaggart of Millbrook, NY and her own Ziezo finished in third with 11 faults in the first round.

The $1,500 Equine Couture & Tuff Rider Low Children’s/Adult Classic was championed by Heather Kuhl of Miami, FL and her own Wasserman, as the pair finished just a tenth of a second ahead of Ava Humphries and VDL Gottie W. Humphries of Highland Beach, FL and her own VDL Gottie W finished their jump-off round in 47.718 seconds. Sara Williamson of Wellington, FL and Pepie Lu, owned by Ossian Ventures LLC, secured third place with a second round time of 50.686 seconds.

Zayna Rizvi of Greenwich, CT and Valdez, owned by Rachael Barnes, took home the blue ribbon in the $1,500 M&S Children’s/Adult Classic with a speedy jump-off time of 49.419 seconds. Julia Strawbridge of West Grove, PA and her own Charina, finished the class with six faults in the jump-off and a time of 53.478 seconds for second, while Rizvi also captured third aboard Forget Me Knot, owned by Peacock Ridge, LLC.

The $1,500 USHJA Pony Hunter Derby saw Alexandra Lynn Willner of Boca Raton, FL and Blackout, owned by Cyrus Taraporevala, take first place with a two round score of 158. Lauren Gee of Valdosta, GA and Grand Slam, owned by Sweet Oak Farm, secured second place with a score of 156, while Sienna Pilla of Ridgefield, CT and Robin Hill’s Snapshot, owned by Piccolino Farm, LLC, received a 155 from the judging panel for third place.

The Neue Schule Bits USHJA Hunter 2’3 & 2’6″ Division was won by Molly Sewell of Winter Park, FL and Big Light, owned by Carolyn Brown Capps. Samantha Shinn of Sarasota, FL and her own Quintos Z captured reserve champion honors for the efforts throughout the week.

Adam Edgar of Leesburg, VA and Q-Pid, owned by Henk Punt, finished atop the division in the #1 Education Place Junior Hunter 3’3″ Division, while Madison Arani of Lexington, KY and Humor Me, owned by Ceil & Kenneth Wheeler, were presented with reserve honors.

The Pilates Rocks Low Child/Adult Hunter Division saw Ashley Netzky of Chicago, IL guide Corporate, owned by Corporate Way, LLC, to the divisional title ahead of Christine Watkins of Rowaton, CT and her own Revelstoke, who were awarded with reserve champion.

The ESP Spring Series continues with competition on Wednesday, April 19 with ESP Spring III. To see a full list of results and to learn more about PBIEC, please visit www.pbiec.com.