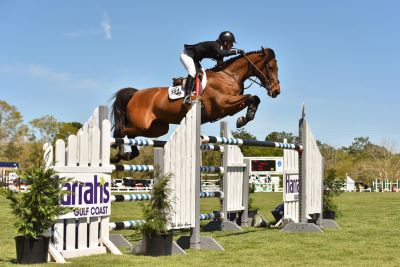 Adam Sklansky of Skillman, New Jersey in the irons of Ellen Walker’s Hakini bested a field of seventeen horse and rider teams to win the $25,000 Harrah’s Grand Prix, which is the first grand prix the pair has won together.

Sklansky and Hakini were the only horse and rider team to turn in a fault-free first round in 71.091 seconds, well within the time allowed of 78 seconds which insured the win. “We were coming off a good showing in Ocala and she’s just been super,” he said.

The course was designed by Nancy Wallis and Paul Jewell from Windsor, New Jersey. About half the class had rails at obstacles six and seven. “Today’s course required the riders to adjust a lot between each test. I saw a lot of overrides out there, and while the time allowed was not the issue, it looked as if they were all riding for time,” Wallis commented.

“I personally didn’t walk the six to seven line today,” said Sklansky. “Hakini is really scopey and I trusted her. Six you had to fade left in order to jump the fence straight, but you needed to stay out a bit and not lock into a number. I faded out, got straight, and gave her a little ride up to it and then I think the last jump was getting people because they were just getting strung out. I wasn’t worried about beating someone’s time. You had to ride the last one like a careful vertical,” he added.

Happy Comly in the irons or Comly Sport Horses’ Clock-Wise CSH placed second with a four fault first round in a time of 70.600 seconds.

Colby Coltrain of Argyle, Texas finished in third overall with Gianna Aycock’s Conquer in a four fault first round in time of 72.258 seconds.

Quinn Larimer of Mableton, Georgia aboard Nestledown Equine Services, LLC’s Bronson CR placed fourth after posting a four fault first round in a time of 72.733 seconds.

Caitlin Burns of Denton, Texas rode her own Diablo Blue to a fifth-place ribbon with their four fault first round in a time of 72.850 seconds.

Larimer returned to the winner’s circle in the irons of Nestledown Equine, LLC’s Olympia Van Het Eikenhof to collect a sixth place for their four fault first round in a time of 73.195 seconds.

Reid Rickett of North Port, Alabama placed eighth with Banderas De Borniva for their four-fault round in 73.661 seconds.

Stephanie Tropia of Magnolia, Texas and her own CR Twilight placed ninth with their four fault first round in 75.108 seconds and tenth with her own CR Dream Boy.

Celine Myers of Dallas, Texas wrapped up the class with a twelfth place finish aboard Will Bonnette’s Diamant.

Sklansky has been riding Hakini for two years. “We stepped her up to the Grand Prix level here last year, but this was our first grand prix we ever won. Having the No entry fee Grand Prix is really nice because it takes a lot of pressure off of us as riders. It’s a really nice thing to do,” he added.