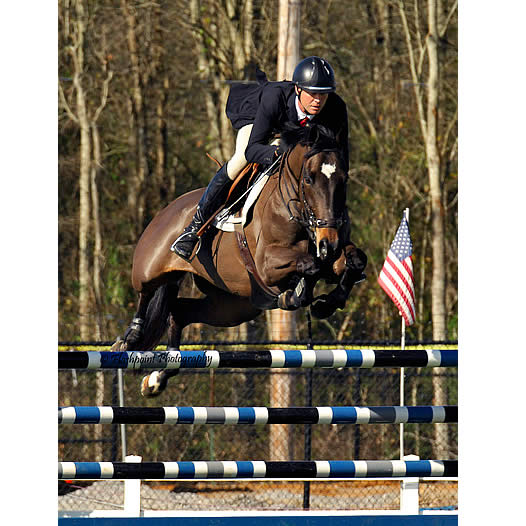 No Worries wins the Welcome and the $2,500 USHJA Hunter Derby saw Iceberg rise to the top!

Gulfport, Mississippi (February 16, 2013) – The Gulf Coast Winter Classic’s National Week saw a field of 21 jumpers gallop onto the breathtaking grand prix arena for the $10,000 Open Jumper Welcome class, but this week it would be No Worries, owned by Barbara Rowland and ridden by Long Valley, New Jersey native Devin Ryan, who would end up in the winner’s circle.

Of the twenty one entries, the class saw ten of the horse and rider teams go clean in the first round.  But it was first-to-go No Worries and Ryan who would post the fastest second round time at 46.806 seconds, which would not be beat by any other team. Second to go was Triompf, owned by Loretta Patterson and ridden by Holly Shepherd of Grand Bay, Alabama, and after posting a clean round in a time of 48.012 seconds, would finish in fifth place overall.  Palim Palim and Wilhelm Genn of Lebanon, Ohio was the next clear round to give it a shot and their time of 52.756 would find them in sixth place overall.

Devin Ryan in the irons on his own Calissandro would find him with a fast second round time of 46.995 seconds, but with eight jump faults would not see him finish in the top eight positions.  Boysterous, owned and ridden by Danielle Grice of Northfield, Minnesota, was the next clear round to tackle the second round and did so in a time of 47.354 seconds which would place her third overall.  Nepal, owned and ridden by Jay Land of Alpharetta, Georgia, posted a second round time of 47.780 seconds, but with eight faults, would finish in the seventh place position.

Wilhelm Genn, riding Ann Anastasio’s Quite Ruffy 840, posted a clean second round with a time of 47.295 seconds and while not quite fast enough to beat Ryan and No Worries’ time, would land the pair in second place overall.  Winchester, owned by Bridlebourne Stables, LLC and ridden by Theo Genn of Lebanon, Ohio, was the next clear round that challenged the leading ride, but with four faults and a second round time of 49.318 seconds, would see the duo finish in eighth.  Frances Land of Alpharetta, Georgia and her own Vieanne were the next clear round to tackle the second course and finished with four faults and a time of 53.041 seconds, which would push them out of the ribbons this time.  And last to go Devin Ryan, this time riding his own Roman Saluut, would post a second double clear round in a time of 47.484 seconds which would place the pair in fourth place overall.

“I am very fortunate to say that I am the only one who has shown No Worries,” said Ryan.  “I have known Barbara Rowland from years ago – I used to do Pony Club with her daughter and through a series of events, I ended up with the opportunity to get him started under saddle.  That was when he was three and now he’s 12.  He is a New Jersey bred Selle Francais and a very talented horse.  We’ve won many grand prix together over the years,” he added.

“The whole new field here is so nice.  It’s a little bit longer grass; it’s really thick and just beautifully lush. It’s like jumping on a carpet!” commented winner Devin Ryan. “My horses have been jumping great on it.  I haven’t been to Spruce, but folks I have spoken that says the footing here is even better,” he added.  “This is the sort of footing that you can jump on every day and your horses won’t be foot sore,” he said.

Ryan brought fifteen horses from New Jersey for all five weeks. “The grand prix field is level and flat and it’s a great venue to develop young horses. And, this show is so convenient to everything.  The restaurants, the beach, everything is brand new and just beautiful. And the show office staff is the nicest in the country,” he commented.  “If it’s rainy, you can use the covered arena and there’s so much room to ride.  I really support the show – it’s my fifth year coming here!”

Well known horsewoman Dudley MacFarlane of Darien, Connecticut and Charlottesville, Virginia is new to the Gulf Coast Winter Classics.  “The footing is magnificent and the grand prix field is amazing. And it’s really nice to have the covered arena to hack under if there’s a little rain.  This is probably the best kept secret in the horse show world,” she commented.  “I’m renting a little cottage one block off the beach which is about a twenty minute drive from the horse show and ten minutes to Biloxi – it’s really nice,” she added.

There is no doubt that everyone is having a great time in Gulfport as the good times rolled from the Premier week directly into the Gulf Coast Classic’s National Week!  Adequan arrived to celebrate Mardi Gras with the Classic team and hosted a Key Opinion Leaders Dinner Wednesday night at a popular Gulfport restaurant and last night’s Mardi Gras exhibitor party was one for the record books with complimentary catered food, drink and music!

Tomorrow’s feature event, the $35,000 Adequan Grand Prix, will take place on the beautiful grand prix field not before 2 pm.  But, come out early and watch the $5,000 1.25m Low Jr./AO Classic and the $10,000 1.40m Jr./AO Class.  Local favorite, The Shack, is the featured VIP restaurant this week.  A huge success, the VIP Club offers tables of eight for only $275 as well as individual tickets. A delicious luncheon and complimentary champagne complement the best ringside action on the show grounds, so stop in the office today and reserve your table or seat!

The Gulf Coast Classic in Gulfport is where the fun will be this winter, so don’t miss it!  Remember, Mardi Gras in neighboring New Orleans goes on during the Gulfport shows and that festive atmosphere spills onto the show grounds. With its close proximity to the Gulf Coast beaches, class offerings, prize money, and social scene, the Gulf Coast Classic Company’s Gulfport shows are a must on everyone’s show list.  The show will feature weekly $2,500 USHJA National Hunter Derbies, the $10,000 International Hunter Derby Week V, and a weekly grand prix, to name a few highlights.  The grand prix schedule continues tomorrow with the $35,000 Adequan Grand Prix, the $35,000 Nutrena Grand Prix on February 24, the $35,000 CWD Grand Prix on March 3 and the circuit grand finale, the $50,000 Budweiser Grand Prix, scheduled for March 10.