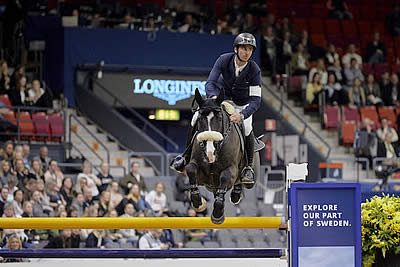 Former double-champion, Switzerland’s Steve Guerdat (36), scorched into the lead as the Longines FEI Jumping World Cup™ 2019 Final kicked off at the Scandinavium Arena in Gothenburg (SWE). Before he cantered into the ring, third-last to go with Alamo, the leaderboard looked like a Belgian whitewash with Pieter Devos (33), Olivier Philippaerts (25), and Francois Mathy Jr (48) holding the top three places after brilliant runs over the 13-fence course set by ace Spanish course designer Santiago Varela.

Defending champions, America’s Beezie Madden (55) and her 13-year-old stallion Breitling LS, had just dropped the very last fence, so with three seconds added to their super-fast time of 60.74 seconds would have to settle for tenth spot at the end of the day. But Guerdat cut a completely clean path to break the timers in 61.28 seconds for the win, squeezing Devos and his gelding, Apart, out of pole position by just three-hundredths of a seconds.

It was the perfect beginning to the seasonal finale that brings together riders from all around the globe, some making a very career-defining debut at the top end of the sport after qualifying from their regional series. So Varela’s challenge was to build a track that not only tested Guerdat, confirmed this week as World No. 1 rider for the fourth month in a row, but also suitable for others much further down the order including Chile’s Rodrigo Carrasco, who is ranked 1,465 but who returned with his brave grey, Acapulco FZ, with just six seconds to add to their tally.

The action began with a dramatic dismount for Guerdat’s good friend and team-mate Beat Mandli who tried a very difficult turn inside the first fence on the approach to the planks at fence 11. His 11-year-old mare Dsarie just couldn’t make it and stopped, unshipping her rider. Guerdat admitted that he had been tempted to take that turn too, but after Mandli’s elimination decided against it. “It was really bad luck for Beät. I felt sorry for him and it killed a bit of the options. And I didn’t need to do it,” he pointed out.

His decision to bring the less-experienced Alamo to these Finals instead of his top ride, Albfuehrens Bianca, wasn’t an easy one to make.

“Bianca is my number one choice for the (Olympic) Games next year, so I thought maybe on the way to there she doesn’t need to do all the Championships. I thought if I have a slightly small chance with Alamo, I will take it!” — Steve Guerdat (SUI)

Alamo proved he is made of the right stuff, presenting his rider with a lot more than a small chance.

“I’m very happy; he jumped well. I had a fast round without taking too much out of the horse. I know that this horse does not go as fast as my other horses, but I know he is quite quick, so I just tried to stay focussed on my plan and what I wanted to do. I didn’t think too much about the others were doing,” he said.

The London 2012 individual Olympic champion has won the coveted Longines FEI Jumping World Cup™ title twice before, first under the bright lights of Las Vegas (USA) in 2015 and then again the following year in Gothenburg. His recollection is that he was lying “fourth or fifth” after the first competition on those occasions, but he modestly insisted that holding the top spot going into the second competition may prove irrelevant.

“We can expect a lot of places to move around; it always changes a lot on the second day,” he pointed out. “I think a mistake is much more important tomorrow than today. Everything looks good today, but everything can look much different tomorrow!” said the man who is hoping to make his 13th Longines FEI Jumping World Cup Final another winning one.