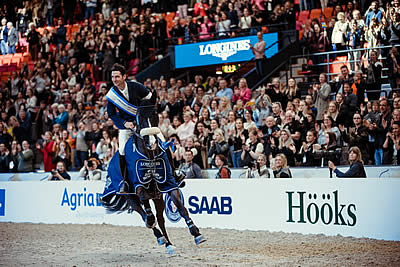 Testament to the perennial attraction of the Longines FEI Jumping World Cup™ series, World No. 1, Switzerland’s Steve Guerdat, has signed up for the opening leg of the new Western European League qualifying season which kicks off in Oslo, Norway this weekend. The man who has topped the Longines world rankings since the beginning of 2019 has an extraordinary record in the series, and this season he has history in his sights. He is a three-time winner, and if he can add a fourth victory, he will be the first rider ever to do so since FEI World Cup™ Jumping began back in 1978.

As defending champion, he is automatically qualified for the 2020 Final which returns to Las Vegas, USA next April, and this is a place that holds great memories for him. Because it was here, at the Thomas & Mack Centre, that he secured his first title in 2015. Guerdat thrives on the tension and excitement created by the close confines of indoor jumping in which speed, accuracy and a mutual understanding between horse and rider are tested to the limit.

Spectators are in for a real treat, as the London 2012 individual Olympic champion has already committed himself to lining out at all of the early-season qualifiers.

Belgium’s Francois Mathy Jr. and the Philippaerts brothers Olivier and Thibault are also travelling north for the Oslo opener at which the host nation’s Gulliksen family of father Geir and son and daughter Johan-Sebastian and Victoria will be flying the Norwegian flag. Heading up a strong Swedish selection will be 2017 European champion Peder Fredricson, along with Henrik von Eckermann who stood on the third step of the podium at the Finals in both Omaha (USA) in 2017 and Paris (FRA) in 2018.

French star, Kevin Staut, is always a consistent campaigner in this series and will be joined by compatriot Olivier Robert. Fresh from the brilliant performance that saw them clinch the Challenge Cup for the hosts from Spain at the Longines FEI Jumping Nations Cup™ Final in Barcelona earlier this month, Sergio Alvarez Moya and the exciting Jet Run will also be in action.

A total of 40 horse-and-rider combinations from 18 countries will compete at this first of the 14 legs that will be staged in 11 countries, as riders battle for one of the 18 qualifying spots on offer. It’s a hectic calendar of events, with Helsinki (FIN) hosting the next round a week later and Lyon (FRA), Verona (ITA), and Stuttgart (GER) following in November. Spain then hosts two legs, in Madrid and La Coruna, in early December before the action moves on to London Olympia (GBR) just before Christmas and then to Mechelen (BEL) immediately afterwards.

As the new year begins there will be still five more legs to go, beginning with Basel (SUI), Leipzig (GER), and Amsterdam (NED) in January and then on to Bordeaux (FRA) and finally Gothenburg (SWE) in February. Just over a month later horses will fly out to the USA for the Final which is always guaranteed to be a thriller.

While Guerdat may be the headliner this weekend, his compatriot Martin Fuchs is bound to be a show-stealer when he rocks up the following week. The 27-year-old chased Guerdat all the way to the line when finishing second at the 2019 Final in Gothenburg, and having followed his individual silver medal success at last year’s FEI World Equestrian Games™ with individual gold at this summer’s FEI European Championships, this is a young man on fire.

He has committed himself to competing at Helsinki, Lyon, Verona, and Stuttgart, so he also clearly has his sights set on adding his name to the list of legends who have won the indoor trophy they all want to claim – the Longines FEI Jumping World Cup.