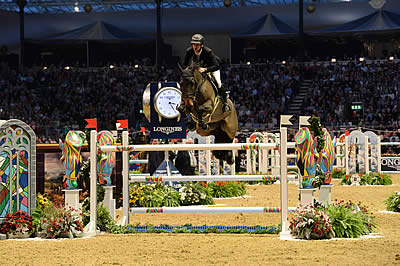 Seven of the world’s top ten show jumpers are set to compete at this year’s edition of Olympia, The London International Horse Show, taking place from 16-22 December 2019. The confirmed line-up will ensure a week of world-class competition, providing unmissable sport and entertainment to the 90,000 spectators due to attend.

World No. 1 Steve Guerdat will be returning to London, the scene of his 2012 Olympic individual gold medal, looking to ride out a spectacular season on a high. He will be joined by his Swiss compatriot, Martin Fuchs, the current World No. 2 and reigning individual European Champion.

Germany will also be sending a strong contingent, headed by World No. 3 Daniel Deusser, a recent winner at the CSI5* in Prague, alongside Christian Ahlmann, currently ranked ninth in the world and always a consistent performer at Olympia.  Adding to the German line-up is show jumping legend Marcus Ehning, who will be vying for a victory to round off a successful 2019 season.

From Belgium will be World No. 6 Pieter Devos, who is sure to mount a strong challenge following his recent victory in the FEI Jumping World Cup of Stuttgart. He will be joined by his 2019 European Championship gold medal winning teammate Jos Verlooy, along with Niels Bruynseels and Olivier Philippaerts. Flying the flag for the USA is FEI World Equestrians Games™ team gold medalist, Laura Kraut.

Following William Whitaker’s outstanding victory in last year’s Longines FEI Jumping World Cup at Olympia, British hopes will remain high for the 2019 Show, as a strong home contingent are set to take their place in the starting line-up.

Current World No. 4, Ben Maher, will be seeking to crown an exceptional year with success at Olympia, having already secured numerous 5* Grand Prix victories in 2019, as well as an individual silver medal at the FEI European Championships. Hot on his heels will be his London 2012 Olympic gold medal winning teammate Scott Brash, fresh from victory in the FEI Jumping World Cup in Verona in November.

Robert Whitaker, a winner at Olympia in 2018, is another to come to this year’s Show high in confidence following his FEI Jumping World Cup victory in Helsinki. He will be joined by Holly Smith, a member of the 2019 European Championship bronze medal winning team which secured Great Britain their ticket for the Tokyo 2020 Olympic Games.

Guy Williams will be returning to Olympia looking to retain his Cayenne Puissance title, following a thrilling five-round contest in 2018 saw him finish equal first. Williams, notorious for his speed against the clock, will be sure to have the home crowd on their feet throughout the week, as he takes on old rivals William Funnell and Laura Renwick, both of whom are also renowned for their speed and agility.

Young riders Emily Moffitt, Amy Inglis, Harry Charles, and James Wilson round off the British contingent. All three come off the back of a strong 2019 season, which has included representing Great Britain at senior level in FEI Nations Cups throughout the season.

The complete list of Show Jumpers set to compete at the Show can be found here.

Simon Brooks-Ward, Show Director, said: “We’ve received an outstanding list of entries for Olympia, and are very much looking forward to welcoming the world’s best to the Show for what is set to be another fantastic competition. It’s rare for British fans to have the opportunity to witness so many quality athletes under one roof and we’re really excited to see how the action unfolds.”