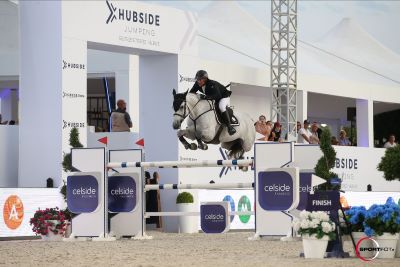 At the end of the day, the leaders of the discipline competed in the major event of the day of the CSI 5 *, a speed rated at 1.50m. It was not only necessary to avoid the pitfalls of the course concocted by the course manager Cédric Longis, but also to go quickly. Penultimate to start, the Frenchman Grégory Cottard got everyone to agree with his breathtaking Cocaine du Val.

It is in front of a packed and generous grandstand that the twenty-three contenders for victory set off on the track of the HUBSIDE JUMPING in VALENCE. First on the starting line, the Habs Alexa Ferrer set the pace, signing from the start a clear course in 65’49. The tone was set. It didn’t take long for the young Briton Jack Whitaker, in the saddle on Elucar VE, to find the keys to a faster stopwatch, lowering it to 61’70: new time to beat. The triple in number 6 and the double in number 8 will have been expensive for more than a seasoned couple on this course. Flawless on the bars, the Irishman Bertram Allen with Fts Killossery Konfusion (3rd), the French Mégane Moissonnier on Aramusse (5th), or Italy’s Emanuele Camilli on Chaccrouet (4th), however, have not been fast enough to take the lead in the competition. We had to wait for the passage of Grégory Cottard, penultimate to start in the event, to achieve this. In the saddle on the beautiful gray Cocaine du Val, the Habs were able to be faster in a very fluid track. A great victory for the Frenchman, selected in the French clan for the next European championships, scheduled for the beginning of September.

Unbelievable! At the end of the impressive 6 bars event, it is not one, but two couples who managed to cross within the framework of the HUBSIDE JUMPING of VALENCE, the last jump-off at 2,00m!

After a first passage at 1.50m and a first jump-off at 1.65m cleared by the eight competitors at the start, six of them gradually inclined to 1.80m, then 1.95m. In the ultimate test of dam or at the dizzying height of 2.00m, there remained only three: Tom Favède saddle on Amarula Cerf (3rd), Olivier Perreau on GL events Dorai Aiguilly, and finally, the very young Léona Mermillod Baron, perched on Cesar du Terroir. If the first named did not manage to leave the line without overturning the bar, Olivier Perreau and Léona Mermillod Baron flew away, literally carried by the public.