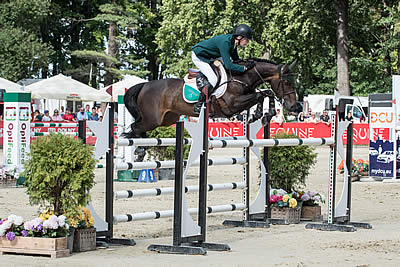 British riders have defended their last year’s title and stood on the highest step on the podium twice: individually and as a team. The silver medal went to France, and bronze to Ireland.

The British team won with the following squad: Finn Healy with Midnight Dancer, Ibble Watson with Bookhamlodge Pennylane, Freya Partridge with Master Macky, and Daisy Bathe with SF Detroit. They took the lead after dressage and kept it until the end of the competition.

The best score in the team, and the best one in the individual ranking, belonged to 15-year-old Finn Healy – 31,7. Although he was tenth after dressage, a clear round inside the time on the cross-country course and only one point for time during the showjumping have earned him his gold medal.

“It was a testing cross-country track, very technical; it required some reactive riding; we all did that and got ourselves in the position to win. It didn’t really sink in yet. It’s a dream come true,” said Finn Healy.

Silver went to his teammate Ibble Watson and bronze to Camilla Luciani (ITA) with Camelot Damgaard.

Daisy Bathe had an unlucky round in the jumping and finished the championships on the seventh position.

The Danish have won three gold medals at this year’s Pony European Championships in dressage: team, individual, and freestyle, where riders performed their rounds to music of their choosing.

The individual medalists have repeated their success. The highest score belonged to the world ranking number one – Alexander Yde Helgstrand with Adriano B – 82,140.

“It’s totally amazing. I didn’t expect to win three times. I choose my music on my own. I’ve actually had this music for quite some time. My pony knows the program and the music, so I think it really fits Adriano,” said the winner after the prizegiving.

The final class of the European championships for ponies in Strzegom determined the individual medals for showjumping.

31 pairs have competed in the two-round competition. 12 of them had a good chance to win gold. Four riders entered the final with a clean slate, and eight with only four penalty points.

The course designer, Szymon Tarant, set up a demanding course in the first round, and only three riders have managed to go clear. The second part of the class, high up to 135 cm, has determined the winner. Max Wachman riding Cuffesgrange Cavalidam became the gold medalist of the 2019 Pony European Championships.

“It’s a great feeling. My pony is top class. The first round was quite tricky, very technical. The second round was less technical and a bit bigger. I’m out of ponies now, so I will focus on big horses and hopefully qualify for the Junior European championships next year,” said the winner.

The audience in Strzegom witnessed a jump-off for the silver medal, between riders from France and Great Britain. Holly Truelove (GBR) was the first one to go. She took a risk riding to the last oxer, which gave her a quick time and made it challenging for her rival. Ilona Mezzadri (ITA) with Callas Rezidal Z took up the glove, but had two down, which gave her a score of 8 penalties, and bronze medal in the final classification.

153 riders from 18 countries competed in three Olympic disciplines during the FEI Pony European Championships in Strzegom.