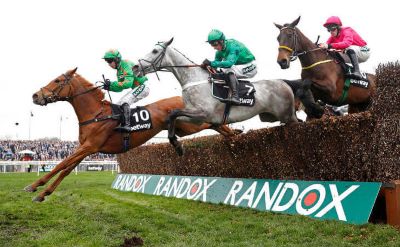 One of the biggest horse racing events in the world presents you with lucrative free bets for the Grand National. To separate the fine grain from the chaff, we thoroughly scrutinize the deals before endorsing any of them.

On February 3rd, 106 entries were announced for the Grand National, of which a maximum of 40 will start. The early favorite in ante-post betting was the 2018 and 2019 winner Tiger Roll, with weights due to be announced on 16 February 16th. Being a proven winner of the race, we can expect the horse to have to carry much more weight. The two-time Grand National winner didn’t get the chance to defend his crown in April 2020, but he should be back for another shot in 2021.

Tiger Roll has time on his side being the age of 11 in 2021. This Gordon Elliott-trained runner become the first back-to-back winner of the Grand National since Red Rum (1973 & 1974). Will we see him become trainer Gordon Elliott’s fourth winner in the race as he also won the 2017 National version with Silver Birch?

Pleasant Company is another potential Willie Mullins runner. This horse does, however, have plenty of Grand National experience as many will remember him running a head second in 2018. He also finished ninth in the 2017 renewal. In the 2019 Grand National, he was in fourth at the time when he threw his jockey four fences from home, so at 13 years old, he could be well to place in 2021.

Anibale Fly is a horse Aintree Grand National fans will remember from 2019 as he had an outstanding run to be fifth. He was beaten by 11 lengths twelve months ago but with now that he has that experience and has another year on his back, he can be expected to be a big player in 2021. He’ll be 11 years old in 2021 and also is considered in top form after running a fair third in the Cheltenham Gold Cup in 2018 and following that up with a second in the 2019 Cheltenham Gold Cup a year later.

Talkischeap is an improving long-range chaser in the making. He rounded off the 2018-19 season by winning the Gold Cup in great style. He’ll only be 9 years old when the 2021 Grand National comes around. His strength will be better after he has run another summer and certainly looks a horse to have in your sights for the 2021 Grand National.

Burrows Saint is a Willie Mullins runner who won the 2019 Irish Grand National.  We use that race often as being a good guide for the Aintree Grand National showing then he’s another horse to note. He will only be 8 years old by the time of the 2021 Grand National comes around and the last horse of that age to win the race was back in 1940! He loves extreme distances so he might be a National horse in 2 or 3 more seasons time as it is hard to ignore that 8-year-old age stat.

The mare Magic of Light is a Jessie Harrington-trained stayer with a gallant second in the 2019 Grand National, and with age on her side she can go well in the 2021 running. She’s likely to have more weight in 2021 after having 11 lbs. in 2019. With that proven experience of the fences, she could be in for a big season ahead in the top staying races.

The average odds of a winning Grand National horse are around 20/1 – while 23 of the last 29 Grand National winners returned a double-figure price. Seven winners had minimum of four runs before going on to win the Aintree Grand National. The only three who had fewer in recent years were Ballabriggs in 2011, One for Arthur in 2017, and Tiger Roll in 2019 with only 3 runs each.

Do note that the best each-way bet usually combines the most likely winner and good odds. Having said that, they may also look into things like outsiders and handicappers and how the first could make a great pick, especially if the market underestimates them.