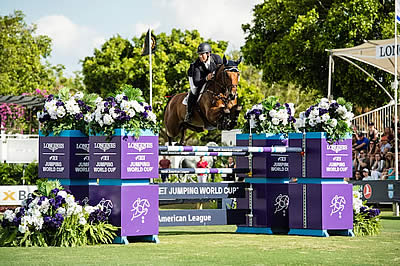 In 2018, Alex Granato (USA) and Carlchen W made their Longines FEI Jumping World Cup™ debut in Wellington. A year later, they earned their first World Cup victory at the same venue.

Granato and ‘Carl’ topped a competitive nine-horse jump-off to claim the 2019 Longines FEI Jumping World Cup™ Wellington under picturesque conditions at the Jacobs family’s Deeridge Farms. Using footspeed to their advantage, they tore around Alan Wade (IRL)’s shortened track in 42.70 seconds, nearly a second ahead of Mario Deslauriers (CAN) and Bardolina (43.48 seconds). Beat Mändli (SUI) and Dsarie were third, finishing with a time of 44.16 seconds.

“It’s all very surreal. It’s been an amazing week. It’s a privilege to ride at a venue like this, against riders like this that I’ve looked up to for a long time.” — Alex Granato (USA)

Granato has had Carl, an 11-year-old Mecklenberg gelding, for five years. Originally meant to be a sales prospect, he put together a partnership with owner Paige Tredennick to develop the horse for top sport.

“He’s a naturally fast horse, so I got to play that to my advantage and let him run at his pace and stay focused on my track and turns,” Granato said. “We got a bit lucky with a rub in the jump-off, but my horse is very fresh, and we were gearing him toward this week. He came out fresh, strong and ready for it.”

Reigning Longines FEI Jumping World Cup™ Final Champion Beezie Madden took over the lead in the east coast sub league standings of the North American League with her fifth-place finish but is already pre-qualified based on her 2018 Finals victory in Paris (FRA). She currently has 58 points, three ahead of Molly Ashe Cawley (USA) with 55.

“Coming into the season, World Cup Finals was a big goal, but after jumping at Nations Cup Finals in Barcelona, I missed many of the early qualifiers,” Granato said. “I’ll take a look at my points, and if I’m in contention, I’ll go to Live Oak.”