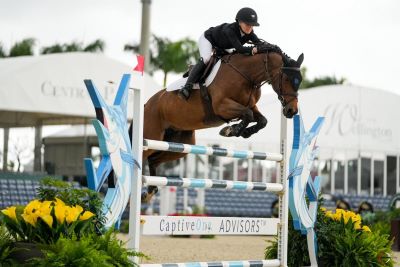 There were 20 combinations that competed over a course set by Anthony D’Ambrosio (USA) and Andy Christiansen Jr. (ECU). Time allowed was a factor with eight riders accumulating time faults. Only three riders ultimately advanced to the jump-off.

First to jump off was Brian Moggre (USA) riding Stevie Macken’s Dior P Z who set the time to beat at 36.95 seconds for an eventual third-place finish. Next to challenge was Debney and her own Boheme de la Roque. They shaved almost two seconds off of Moggre’s time, finishing in 35.02 seconds. Matthew Boddy (GBR) was last to go in both the first round and the jump-off, but he couldn’t quite catch Debney, crossing the timers in 36.20 seconds and finishing in second place.

Debney was competing in the $10,000 SJHOF High Junior Jumper Classic, presented by Griffis Residential, when it started torrentially downpouring, and management eventually had to put the show on hold.

The first championship in the Rost Arena was for the T&R Development Large Junior Hunter 15 & Under division. Sterling Malnik of Ocean Ridge, FL with her horse In Writing topped three out of the five classes in the division on their way to the championship title.

The division started Saturday and resumed with the under saddle on Sunday morning, in which Philippa Ammann strutted to the win with Katarina Ammann’s Balousock B.B.S. Ammann and the 13-year-old Swedish Warmblood gelding by Balougraph went on to score an 85 in the stake class for their second win of the day, boosting them to the reserve championship honors.

It was Malnik and In Writing’s consistency over the two days of competition that ultimately clinched the championship. The pair won both over fences classes on Saturday including the handy with scores of 86 and 88. They finished on Sunday with a win in the third over fences class with a score of 86.