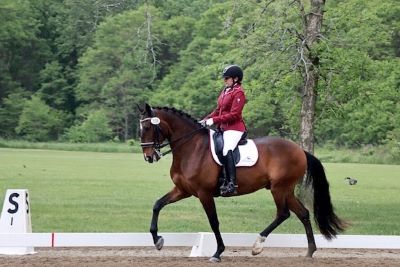 Mashapaug, CT (November 7, 2022) – Gótico Interagro and owner Randi Joslyn of Quadrifoglio Dressage added a few more accolades to their list of awards earned during their 18-month partnership. In that short period of time, the pair has been named to multiple Championships and Reserve Championships for the United States Dressage Association (USDF) and their local GMO, and plan to move up to the Prix St. Georges Level in 2023, with their sights set on their first CDI.

Bred by Interagro Lusitanos in Brazil, Gótico came to Joslyn in the spring of 2021. After seeing something special in the beautiful mahogany bay gelding, a week later Gótico was part of the Quadrifoglio family. The pair started out at Second Level, and in less than a year they were named the 2021 USDF US Lusitano Reserve Champion in the Third Level Open division, the 2021 Connecticut Dressage Association Third Level Open Champion, the 2022 US Lusitano Champion at Fourth Level in both the Open and Adult Amateur divisions, and the USDF Fourth Level Vintage Cup Champion. Gótico has since been successfully schooling the Prix St. Georges and FEI movements, pulling from the natural athleticism, intelligence, and rideability Interagro strives for in their breeding program.

Gótico Interagro is by Profano Interagro, a stallion known for producing exceptionally versatile and athletic offspring. Gótico, before being exported to the US, was highly awarded in Working Equitation, and was beloved in Interagro’s training barns as a young horse because of his exceptional personality. The gelding’s unique character and abilities are what drew Joslyn to him to start, and have proven to be an incredibly important aspect of their training up the levels.

“He has the most amazing personality,” said Joslyn. “I describe him as an old soul because it’s like there is a wisdom about him. He is picky about who he sees as ‘his people,’ but he is kind to everyone. He’s extremely athletic and incredibly smart. He picks up on new skills quickly and then goes out of his way to make you happy. There is also a regal side to him, so much so that he has become affectionately known as ‘his lordship’ in the barn. I’m really looking forward to moving up with him and I hope to someday compete with him at Grand Prix. He truly is the most amazing horse and I feel very honoured that he let me into his enormous heart.”