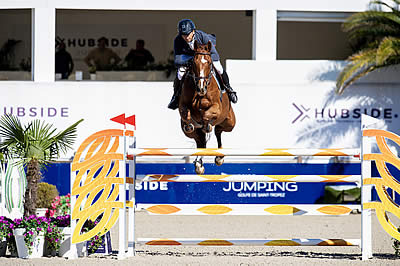 Julien Epaillard has lived up to his reputation, and wins, at a breakneck pace, in the opening round of the last CSI 4* of the year at the HUBSIDE JUMPING in Grimaud. Associated with Usual Suspect d’Auge, he is ahead of his compatriot Mathieu Billot, in the saddle on Bad Boy du Bobois, and the Brazilian Marlon Modolo Zanotelli, third at the controls of Icarus.

“You can say that I was a little lucky today: I made a nice ‘touch’ on the tackle which fortunately did not fall. There were a lot of serious competitors, and moving up to eleventh position, I knew I had to take all the risks. Which led, I think, Emanuele Gaudiano and Carlotta to the fault, important competitors when it comes to going fast. Emanuele to take all the risks – he had no choice. It’s fair game. When he comes before me, as was the case last week, he doesn’t hesitate. Last week, I played the game too much: I was faster but with two faults. It was my revenge today. Usual Suspect d’Auge is in great shape. In the Grand Prix du CSI 2*, like last week, I will be associated with Lima de Muze, and in the CSI4* Grand Prix, at Alibi de la Roque.”