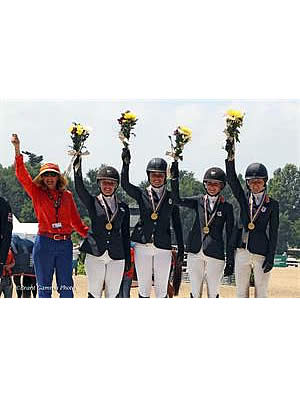 Lexington, Ky. – Team show jumping competition took center stage in the Rolex Stadium at the 2015 Adequan/FEI North American Junior & Young Rider Championships presented by Gotham North (NAJYRC) on Thursday. Para-dressage riders simultaneously vied for their Team medals in the discipline’s first appearance at the NAJYRC, and riders covered ground across the Kentucky Horse Park and beyond in the 2015 endurance race.

In the USHJA North American Junior and Young Rider Show Jumping Championship, the Junior Team Gold medal went to Zone 4, while Zones 3/5 claimed the top spot on the podium in the Young Rider Team competition.

The Zone 4 team of Brett Burlington (16, Coral Gables, Fla.), Louise Graves (18, Franklin, Tenn.), Mackenzie McGehee (17, Jacksonville, Fla.) and Sophie Simpson (17, Royal Palm Beach, Fla.) led from early on in the team competition through to the end of the second round to clinch the Gold medal. As a team, they accumulated an impressive five clear rounds, with both Burlington and Simpson producing double clear efforts on their mounts Anders Wictor L and Why Not, respectively. The Zone 4 Chef d’Equipe was Kim Land.

In the first round, Graves finished on just one time fault aboard Zavira, and McGehee ended on 12 faults riding Unique. McGehee’s 12-fault finish would serve as the team’s first round drop score and leave them in the lead on only one fault at the end of the first round.

Zone 4 continued their impressive efforts in round two with Graves finishing on eight faults and McGehee, Burlington and Simpson all turning in clear efforts to secure the team victory.

“It hasn’t sunk in yet. I think I can speak for all of us when I say that this has been a huge dream for us,” Simpson said. “Everything was aligned for us today, and we had a great day.”

Giving Zone 4 a run for their money early on was the combined team of Zones 5/9 who finished with the Team Silver medal. Vivian Yowan (17, Lexington, Ky.) on Vornado Van Den Hoendrik and Annika Faught (17, Ashford, Ore.) riding Quintara kicked things off for the team with clear efforts over the Alan Wade-designed course. Emma Wujek (14, Grosse Pointe Farms, Mich.) and Ugaf finished the first round on 13 faults, while Daisy Farish (14, Versailles, Ky.) and Triviant rounded out the team’s efforts with just four faults. In the second round, Yowan again mastered the track without fault, producing her second clear round, while Wujek and Farish each finished on just four faults, and Faught ended on 16. Their efforts would leave them with a 12 fault total over the two rounds. Abby Blankenship served as the Zones 5/9 Chef d’Equipe.

Yowan leads the way as the early front runner in the Junior Individual competition with 3.08 faults after the first three rounds of competition. Simpson is in second with 3.50 faults and Gaspar Albanez is third with 4.00 faults.

Kalvin Dobbs (19, Carmel, Ind.) and Bukato finished on 12 faults in the first round and 16 faults in round two. Jacob Pope (20, Columbia, Md.) had eight faults in the first round on Zilvana, but the pair improved their performance the second time around to turn in a clear round. Noel Fauntleroy (20, Manakin-Sabot, Va.) was the powerhouse of the team, producing a double clear effort on Cabras, and Meredith Darst (18, Lebanon, Ohio) and Quester De Virton finished on one and four faults. The Zone 3/5 team was led by Chefs d’Equipe Sandra Ruiz and Abby Blankenship.

“It really was a team effort. Noel was clear the whole way through; Maddy really carried us through it too, and I had eight faults and one clear, so we kind of all pitched in,” Pope said. “It’s really exciting; this is what I was really going for this year.”

The team of Zones 4/8 was neck-and-neck with the Zone 3/5 team, leading the competition all the way down to the wire, but a rail at the very last fence of the very last ride would relegate them to the Bronze medal position and secure the Silver for Zone 2.

The Zone 2 team finished on a total of 8 faults, with faults spread across riders. Katherine Strauss (16, Southampton, N.Y.) and All In had 13 in round one and four in round two. Sima Morgello (19, Bronx, N.Y.) and Oritentales finished on eight faults over the first round and then came back to improve her efforts with a clear round the second time around. Kira Kerkorian (17, Sagaponack, N.Y.) on Nightfire 25 Lucy Deslauriers (16, New York, N.Y.) on Hester each turned in clear first round efforts and had four faults and eight faults, respectively, in the second round. Ralph Caristo served as the Chef d’Equipe for Zone 2.

Finishing on a team total of 20 faults to take the Bronze medal was the Zones 4/8 team of Kaely Tomeu (19, Wellington, Fla.) and Fidalgo Van Het Leliehof, Brittni Raflowitz (20, Palm City, Fla.) on Baloumina Du Ry, Kelli Cruciotti riding Wallenberg (17, Elizabeth, Colo.) and Victoria Colvin (17, Loxahatchee, Fla.) aboard Lumiere. Tomeau finished on eight faults in the first round and four faults in the second round. Cruciotti had 12 faults in round one and eight faults in round two, while Colvin went clear in the first round and had eight in the second round. Raflowitz was the powerhouse of the team, turning in a double clear effort. The Chef d’Equipe for Zones 4/8 was Kim Land.

Fauntleroy’s efforts on Thursday shot her toward the top of the Individual leaderboard with a total of 3.49 faults. Raflowitz is second on 4.15 faults and Darst is third on 5.00 faults.

Team USA led the team competition of the North American Young Rider Para-Dressage Championship on Thursday in the Stonelea Ring at the Kentucky Horse Park. This year, para-dressage makes its debut at the NAJYRC and has already proven to be a tough competition, with team USA and Canada going head-to-head for the top spot.

Sydney Collier on Wentworth impressed the judges, receiving a score of 67.650% in the FEI Grade 1b Team Test. Canadian rider Cambry Kaylor placed second on Markgard Donnewind, earning a score of 62.650 percent.

The Para-Dressage Team results are listed below:

Para-Dressage continues on Saturday beginning at 10:00 a.m. with the Para-Dressage Individual competition, following which both Team and Individual medals will be awarded.

Kelsey Russell of Williston, Fla. won the individual competition of the North American Young Rider Endurance Championship aboard My Wild Irish Gold on Thursday with a time of 5:43:56.

“I didn’t think she was going to stop,” said a grinning Russell, 19, after she dismounted.

Fourteen riders started the 120 km (75-mile) 4* course at 6:30 a.m. in crisp weather and a soupy mist that made it challenging to see at a distance. By noon, however, the sun was shining brightly, and the air was a hot, heavy blanket of Kentucky humidity. The first horse crossed the finish line shortly after 3:00 p.m.

Because of torrential rains earlier in the week and for the safety of the horses, portions of the course were rerouted the previous day. The entire race (five loops) took place on the 1,200-acre Kentucky Horse Park grounds instead of crossing adjacent private properties, as has done previously and was planned this year.

Although there were some muddy stretches, Russell said the course rode very well. “Emmett Ross [the course designer] did a really good job. By the end of the last loop most of the footing was dry. We took it easy the first two loops, and by the third she was ready to rock ‘n’ roll.”

Owner Valerie Kanavy, a legendary endurance rider, who is also Russell’s coach, bred her mount. Kanavy said the 11-year-old mare will have some time off as a broodmare after this event. She described Russell as “a very special young lady,” adding, “She works her tail off and is already managing our whole training program, which has 17 horses. She’s amazing – a straight-A student who can do just about anything.”

After this race, Russell has finished 13 of 14 starts, placing within the top five in each, including the 2013 FEI World Endurance Championship for Juniors and Young Riders. She is starting her sophomore year in college as a business major and plans to become a veterinarian.

The USA Southeast team claimed Gold with a combined time of 19:35:15. The members are:

The endurance medals ceremony will take place on Friday at 11:00 a.m. along with the announcement and presentation of the best-conditioned horse award.