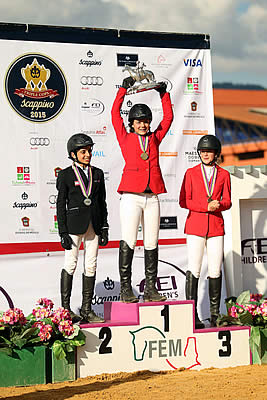 These Championships are designed to develop young talent, and the 2014 qualifying series visited 34 venues all around the globe, beginning at Gisborne, New Zealand a year ago and concluding in Delhi, India last November. Divided into gold, silver and bronze tours, it is the gold tour riders only who participate at the world Final where the visitors compete on borrowed horses over courses up to 1.30m in height.

The event took place across several days, and included training opportunities, a warm-up competition, two qualifying classes, a Farewell competition and the Final which is open to the top 16 athletes based on results accumulated across two qualifiers and limited to a maximum of eight athletes from the host country.

Host nation athletes are permitted to bring two of their own horses to the event, and draws establish which of the two they will ride. A further draw pairs up the foreign athletes with the remaining horses on offer, but it was the home runners who dominated the two qualifying rounds, filling the first nine places in the opening competition and the top seven spots the following day.

Martina Franco took the early lead with a win in last Wednesday’s first qualifier with Zenith M, pipping the eventual bronze medallist Ana Sofia Alban and Wagner by almost a full second in this speed competition which saw 12 of the 32 starters jump clear.

Eugenia Garcia had to settle for seventh spot this time out with Coqueta LA, but the following day the pair reigned supreme ahead of Paulina Escobar riding Quo Libri de Comene while another of the Mexican contingent, Carlos Hank, lined up third. There were 15 into the jump-off here, and 11 produced double-clear performances to underline the quality of the riders taking part.

Russia’s Matveeva made an impression when the highest-placed foreign rider in each of the first two competitions. This year’s Team bronze medallist, Venezuela’s Constanza Romer, won individual gold at the 2013 Championships staged in Brazil.

The course for Saturday’s top-16 Final was challenging with some tricky lines, and riders made mistakes everywhere on the course. Only six managed to jump clear first time out, and Mexico’s Antonia Abascal was unlucky to lose out on a place in the jump-off when collecting a single time fault.

The six-horse jump-off was a thriller, with Issam Haddad from Lebanon setting the target when first to go with Cilantra and piling on the pressure with a fast clear in 37.45 seconds. Australia’s Sophia Carlon was next in with Kleiner Ottifant but, although fault-free, was three seconds slower and when Nicole Meyer (Welverwind) returned with two fences down and fellow-Mexican Ana Sofia Alban (Wagner) was clear but two seconds off the pace the result was still wide open with two still to go.

Paulina Escobar and Quo Libri De Comene looked set to overtake Haddad until hitting the last and then only Eugenia Garcia and Coqueta LS stood between the 13-year-old Lebanese rider and that glittering gold medal. But Garcia made no mistake, steering her horse home in 34.70 to demote Haddad to silver and Alban to bronze.

“I had a great result, winning the second qualifier and the Final – I still can’t believe that I won!” said Garcia afterwards. “I started the jump-off with confidence; I owe that to my mental coach Constanza Guerra who has helped me to believe in myself, to have trust and to go into the ring as if I was training at home,” added the rider who will turn 14 next month. Talking about her jump-off ride, she continued, “My horse Coqueta LS is an expert on tight turns and jumped spectacularly. My tactic for the jump-off was to stay in the planned rhythm and pick up time on the turns without taking too many risks. When I came out of the ring I saw my father crying, he was very proud!” she said.

Silver medallist Issam Haddad commented, “From the first training session I already had a good connection with my horse. In the second qualifier I had an unlucky fault at the last fence and I was a bit angry with myself as I thought I might not be qualified for the Final, but I did qualify and was super happy! I started the jump-off with nothing to lose as I knew I was already placed, but of course I was hoping for a place on the podium. I rode my own round, didn’t take all the risks but wanted to set a good time to put the pressure on the rest as there were a few more to come after me,” explained the young man who was accompanied to the Championships by his parents, a family friend and his trainer, Karim Fares, who rides internationally for Lebanon.

Ana Sofia Alban was delighted with her bronze medal. ”It was great!” she said. “I was a bit nervous going into the Final, but a good kind of nervous which made me sharp. The course was not easy; in fact it was pretty tough. I had fun riding the jump-off as the crowd started whistling and cheering me on during my round. My plan was short turns but first of all aiming for a clear round so I didn’t risk it all,” she explained.

There was also a Style Award, which went to Belgium’s Thomas Thometschek riding Tambo Negro. “I had so much fun!” Thomas said. I didn’t qualify for the Final but when I heard that there was an award for the most stylish rider I was hoping I had a chance of winning it. My trainer Rik Deraedt was here with me and I have learnt so much from him. I owe my style of riding and eye for the fence all to him,” he pointed out.

The Organising Committee at Valle de Bravo did themselves proud and gave the children an experience they will never forget. Apart from the competitions, a lot of extra activities were organised including go-karting, climbing, archery and zip-lining and the 32 young people all went home having enjoyed themselves thoroughly, made many new friends, demonstrated their talent and learned a great deal.