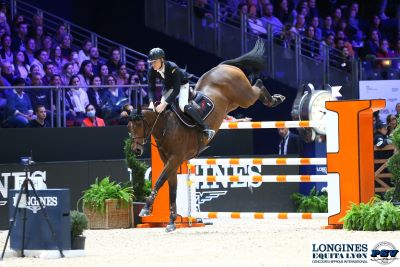 The reigning Olympic team champion Henrik von Eckermann has clearly not had his fill of success! Riding the dazzling and dynamic Glamour Girl, the Swedish rider sealed another great victory in the Equita Masters, presented by Hermès Sellier. He follows on from Scott Brash and Hello Shelby, who won the event in 2019.

“Over the last few years, I often finished second. But recently, the wheel seems to have turned and I can’t say I’m unhappy about it! I don’t think I’ll ever experience a year like this again,” joked the rider. This was the couple’s first victory in the 1.60m class. “She was fantastic. At the moment, she just wins everything; I’ve lost count of how many events she has won. It’s incredible how she manages to come out on top every week!” The couple managed to complete two clear rounds in the fastest time (38”95), finishing ahead of the Austrian riding Max Kühner on Up Too Jacco Blue (42”16). The British rider Holly Smith on Denver – who has been in great for his week – finished in third place (42”96).